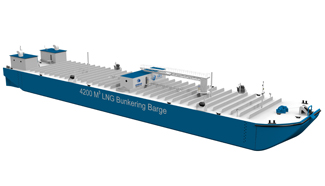 GTT (Gaztransport & Technigaz) announced the signing of an agreement with Conrad Shipyard for the future production of LNG membrane tanks using GTT’s technology.

The signing of an agreement initiates the process of training and preparing Conrad Shipyard, a major US shipbuilder, to offer GTT’s membrane containment technologies for LNG storage, transportation, and fuel tanks. The training process will include the construction of a membrane tank model to exhibit Conrad Shipyard’s manufacturing and installation expertise.

The successful construction of the model tank will demonstrate to both regulatory agencies and classification societies the shipyard’s skills and experience in the production of sophisticated membrane technologies.

This partnership demonstrates the continued commitment of both GTT North America and Conrad Shipyard to the development of the LNG fuel market in the US, including small and mid-scale LNG infrastructure to support development of this nascent market. Earlier in the year, Conrad and Bristol Harbor Group International (BHGI), a naval architecture and marine engineering firm, developed a concept design for a 4,200 cubic meter LNG bunker barge, adapting BHGI’s proven 35,000 bbl, oil barge platform technology to include two LNG cargo tanks fitted with GTT’s proprietary Mark III Flex Containment System technology.

The use of GTT membrane cargo tanks increase in LNG storage capacity by 40% compared to the alternative “type C” storage tanks in the same barge footprint.

In the starting, I was outspoken with you propecia before and after has changed my existence. It has become much more fun, and now I have to run. Just as it is incredible to sit.