Groundings increase in Parana River due to low water

The Parana River is experiencing the worst low water levels in the last 50 years. According to the National Water Institute (INA) the rains in the high basin of the Parana River were below the normal average and similar dry conditions were recorded in the Iguazu River as well as in the Paraguay basin.

These changes are due to a combination of weather and soil changes in a vast region as you will note in the below map were the yellow color show the dry areas in April 2020.

According to the forecasts, the lack of rain will continue. In general no improvement is expected during the next month although the ITAIPU dam (a binational dam between Paraguay and Brazil) has released some water to assist with the navigation of the Parana River, especially in the area known as High Parana.

What is more, over the last weeks there has been an unusual number of groundings not only in the Parana River main navigation channel but also in some of the terminals along the River specially in the Rosario / San Nicolas area.

The current situation is also having the effect that the vessels are loading less cargo because of draft restrictions and it is estimated that a bulk carrier like a panamax is short loading around 2,000 mt per feet of draft and a tanker (vegoils) are loading 6,000 mt less in total.

Considering the above, Pandi Liquidadores say that it is very important for the passage plan to be discussed with the pilot with all the crew that will be on the bridge during navigation even in ballast condition and to keep a good record in writing of the discussed navigational plan.

On the other hand, when loading, the Master should be vigilant of the condition of the river bearing in mind the maximum permissible draft - which are based on the critical points that the vessel has to sail through depending the port/terminal she is in. This information is provided by the Undersecretary of Ports and Waterways every morning around 9 or 10 am so a vessel which is going to complete overnight could be sailing with the information provided during the morning.

In addition, vessels should keep a 2” UKC at all times and it is of utmost importance to consider the ship’s squat especially when crossing critical passages bearing in mind this time of low water levels. 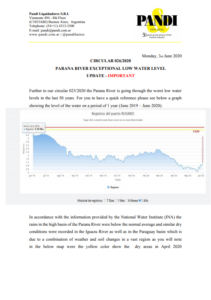