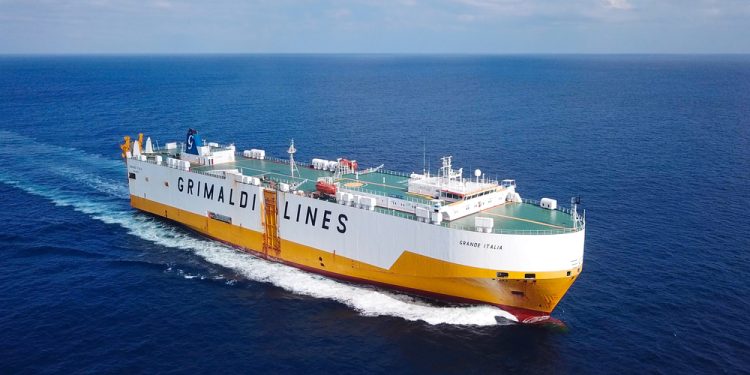 Grimaldi increased the number of car carriers designed for eventual conversion for the use of ammonia as a marine fuel to 15.

The concept of the new buildings was developed by the Grimaldi Group in collaboration with the Knud E. Hansen naval design and architecture studio.

With a loading capacity of over 9,000 CEU (Car Equivalent Units), they are designed to transport electric vehicles as well as fossil fuel vehicles.

They received the Ammonia Ready class notation from RINA, which certifies that the ships are designed for eventual conversion for the use of ammonia as a marine fuel.

These vessels will be equipped with mega lithium batteries, solar panels, shore connection capability, and other technologies to reduce the carbon footprint.

Overall, the new ships will be able to cut fuel consumption by 50% compared to the previous generation of car carrier vessels. The new PCTCs will be deployed on voyages between Europe, North Africa, and the Near and Far East to meet the new transport needs of automotive industry players.

Grimaldi is committed to green shipping and will lead further the car shipping transportation field. CMI Group will also take the green technology shipbuilding as a new growth point and cooperate with Grimaldi to achieve common long-term development

The ten vessels commissioned from China Merchants Heavy Industries Jiangsu will be delivered between 2025 and 2027.