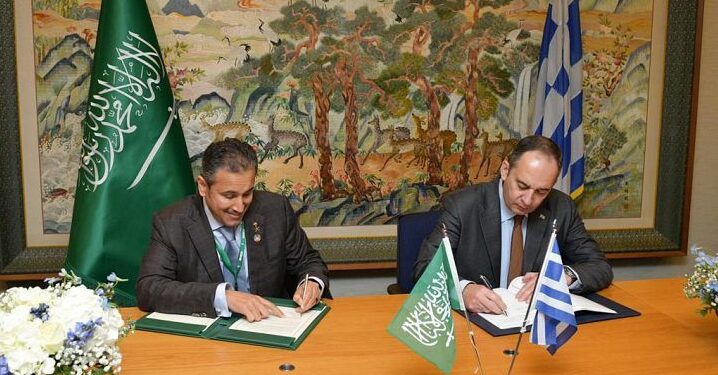 On 8 December, Saudi Arabia and Greece signed a joint cooperation agreement in order to enhance their shipping collaboration.

The deal was signed by Saudi Minister of Transport and Logistics Services and Chairman of the Public Transport Authority Saleh Al-Jasser and Greek Minister of Maritime Affairs and Island Policy Giannis Plakiotakis in the British capital, London.

The agreement aims to strengthen relations between the Kingdom and Greece at the strategic level and open new horizons for cooperation in various fields, especially maritime transport. It includes developing commercial maritime navigation, increasing traffic of commercial ships to transport passengers and goods, as well as supporting and encouraging trade exchange and facilitating the requirements and procedures for accessing the ports of both countries.

Under their collaboration, both sides aim to enhance the exchange of expertise and technologies between companies, institutions and maritime organizations in this field. The deal also included a mechanism for the treatment of ships of both countries when accessing their ports, stay and departure, and in cases of emergency and maritime accidents in their territorial waters.

Al-Jasser said the agreement aims to provide facilities to maritime transport companies, their ships and crews, and will mutual recognize the documents of ships and seafarers of both countries. Namely, he said it will held develop joint investment opportunities in the field of maritime transport and logistics services to achieve strategic goals and diversify the sources of income for the total output of both countries’ economic sectors.

This agreement between Greece and Saudi Arabia “significantly enhances maritime relations between the two countries, and is the springboard for deepening their strategic partnership in shipping,” noted Plakiotakis.

Signing this agreement “has been a priority for both countries since 2013, and is a result of a strong political will to deepen their constructive cooperation,” he added.