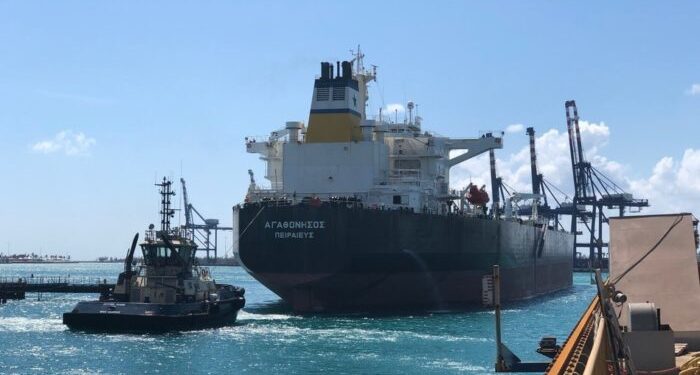 Grand Bahama Shipyard (GBS) announced that it has officially resumed operations and welcomed back its first commercial vessel. This would be the 57,062-ton Agathonissos owned by Greece-based Eletson, which returned to the yard on September 11 to finalize repair work that started before Hurricane Dorian arrived in the Bahamas earlier this month.

In addition, the shipyard, based in Freeport, Grand Bahama, informed that it remains on schedule for the next planned cruise ship visit, Carnival Cruise Line’s Carnival Ecstasy, planned to arrive on October 5.

Overall, Grand Bahama Shipyard expects to service 29 dry-dockings during the remainder of the year, assisting in support recovery efforts.

Due to the storm, Grand Bahama Shipyard sustained had no significant damage, as it was limited mainly to some erosion with no effect on berths. Namely, the shipyard is capable to fully power its core operations, including docks, workshops and administrative functions, as well as communications infrastructure.

It was extremely important to get up and running as quickly as possible and begin taking in vessels to help support the employees and families at the shipyard, along with economic contributions and rebounding activity for the island. This is a significant sign of positive progress for the island, and we look forward to continuing our normal operations while also supporting the Bahamian recovery

Grand Bahama Shipyard is conducting dry-docking, afloat repairs, refurbishments refits and revitalizations for vessels from the cruise, commercial and offshore segments of the maritime industry. It schedules 85-100 drydocks each year, including more than two dozen cruise ship drydocks every year.

Hurricane Dorian had disastrous impacts while passing the Bahamas, coasts of Florida and Mid-Atlantic states. In a last update, the USCG deployed 14 helicopters, 10 airplanes and three cutters to the Bahamas. Oil major Equinor published a statement informing that Hurricane Dorian damaged its terminal and led to an onshore oil spill, which then stated that it cleaned up.