GPS rollover: A potential threat to the safety of navigation

On January 2, 2020, some models of FRUNO GPS or GMDSS devices with built-in FRUNO GPS experienced the ROLLOVER phenomenon, which caused a lot of trouble for many ships, reports Capt.Zhaoqingwei, Marine Safety Manager at DASIN SHIPPING PTE LTD.

According to WIKIPEDIA, the GPS Rollover phenomenon is explained as follows:

The GPS week number rollover is a phenomenon that happens every 1024 weeks, which is about 19.6 years. The Global Positioning System (GPS) broadcasts a date, including a week number counter that is stored in only ten binary digits, whose range is therefore 0–1023. After 1023, an integer overflow causes the internal value to roll over, changing to zero again. Software that is not coded to anticipate the rollover to zero may stop working or could be moved back in time by 20 or 40 years. GPS is not only used for positioning, but also for accurate time. 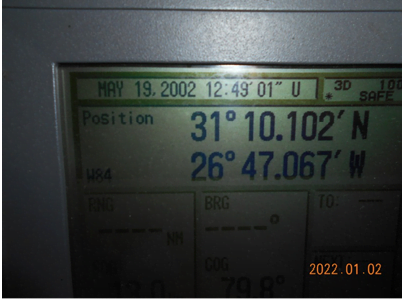 Recent case of a GPS ROLLOVER event occurred onboard one ship

A ship was sailing in the ocean and at about 2250 hours local time on Jan. 1, 2022, the officer on duty found that the ship’s VDR alarm showed 026 (GPS LARGE TIME DIFFERENCE), and then found that the date of the ship’s DGPS1, DGPS2, VSAT, compass, radar, ECDIS, AIS, Inmarsat-C station, VHF, M/HF radio station and other equipment were all changed to May 19, 2002. But the UTC time, ship position, heading and other data were displayed normally, only the date was abnormal. The current DGPS1 was used, and after the officer checked the manual and restarted DGPS2, they found that the date was still displayed abnormally. 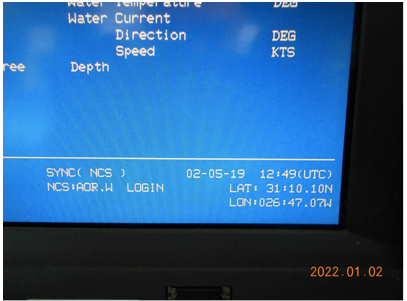 Regarding this GPS rollover, FRUNO website posted an important notice to remind the customers about the forthcoming abnormal GPS errors. Furthermore, FRUNO listed all the equipment that may be affected by the GPS week number rollover occurrence on 2022/01/02.

In the notice, FRUNO also provides a related counter measures called “cold start”, by which the ship’s position can be restored, but the date still cannot be changed and it can only be restored by replacing the device or through a software update.

As we all know, there is no problem for safe navigation as long as the ship position is regained.

However, it is very troublesome if it affects ECDIS. Because if the system time is not displayed properly it may cause some ECDIS to black out suddenly, which will be fatal to navigation safety.

Sometimes, it will also cause the chart display of ECDIS to be abnormal. Imagine that any failure regarding ECDIS charts is a fatal threat to the safe navigation of a ship while she is navigating in the channel.

Not only FRUNO, but also other brands of GPS have similar situation, for example, JRC has also posted a warning on their website. We have listed the GPS ROLLOVER phenomenon that will happen in the next few years for the major GPS brands for your reference

Remark: The above information is for reference only, the specific equipment manufacturers website notice shall prevail.

For the safety of the ship, the shipping company is advised to contact the manufacturer as soon as possible to seek the appropriate solution.