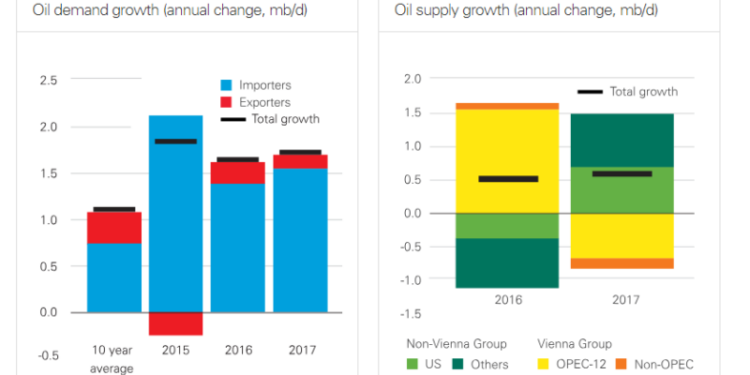 In 2017, oil demand grew by 1.7 Mb/d, similar to that seen in 2016 and significantly greater than the 10-year average of 1.2 Mb/d, according to BP’s annual review of world energy. Not surprisingly, the 2017 demand continued to be driven by oil importers benefitting from the windfall of low prices, with both Europe (0.3 Mb/d) and the US (0.2 Mb/d) posting notable increases, compared with average declines over the previous 10 years. Growth in China (0.5 Mb/d) was closer to its 10-year average.

To put the recent strength of oil demand in context, average growth over the past five years is at its highest level since the height of the commodity super-cycle in 2006-07. This was despite all the talk of peak oil demand, increasing car efficiency, growth of electrical vehicles. All of those factors are real and are happening, but persistently low oil prices can have a very powerful offsetting effect.

But there were some signs in the product mix that the boost from low oil prices may be beginning to wane, BP Chief Economist Spenser Dale explains. Growth in consumer-led fuels most exposed to oil price movements, especially gasoline, slowed in 2017. In contrast, diesel demand bounced back, buoyed by the acceleration in industrial activity.

What about supply, particularly the interaction between the OPEC production cuts and the response of US tight oil?

The impact of the production cuts can be seen in growth of supply last year. At an aggregate level, output growth in 2017 (0.6 Mb/d) was similar to that in 2016. But the pattern of that growth flip-flopped quite sharply. After growing by 1.6 Mb/d in 2016, output by OPEC and other members of the Vienna group fell 0.9 Mb/d last year as the cuts in production took effect.

In contrast, after falling in 2016, oil production by countries outside of the Vienna group grew by 1.5 Mb/d, led by the US and a bounce back in Libya (which was not part of the Vienna agreement).

The Vienna group had a target for production cuts of almost 1.8 Mb/d, relative to the base month of October 2016. In practice, the production cuts have far exceeded that, with cuts totalling nearly 2.5 Mb/d in April 2018. This overshoot has been concentrated in Venezuela – where the economic and political crisis has caused production to fall by almost 700 Kb/d, far in excess of the target reduction of 100 Kb/d – and to a lesser extent in Saudi Arabia and Angola.

The production cuts were instrumental in increasing the pace at which oil stocks fell back to more normal levels last year. With the cuts in place, daily consumption exceeded production for much of 2017. As a result, OECD commercial inventories fell by about 150 million barrels in 2017, and in March of this year were broadly in line with the five-year moving average measure originally highlighted by the Vienna group.

That said; the impact of the production cuts would have been even bigger had it not been for the response of US tight oil and NGLs, which have grown by almost 2 Mb/d since October 2016. Indeed, the pace of this second wave of growth in US tight oil seen over the past 18 months or so is comparable to the rapid growth seen in 2012-2014, even though prices in the earlier period were materially higher. The scale of the increase in US tight oil meant the impact of the production cuts was increasingly offset as we moved through 2017.

The speed and scale of OPEC’s actions mean that it continues to have the ability to smooth temporary disturbances to the oil market. But the relatively rapid response of US tight oil reinforces the limits on OPEC’s power. If OPEC tries to resist more permanent or structural changes in the market, there is an increasing risk that these actions will quickly be cancelled out by the responsiveness of US tight oil.

Finally; bringing these developments in demand and supply together in terms of their implications for prices. Prices drifted lower during the first half of 2017 as stocks remained stubbornly high. But as the production cuts started to bite and inventories began to fall, prices increased with Dated Brent reaching a high of $66/bbl by the end of last year. For the year as a whole, Brent averaged $54/bbl, up from $44/bbl in 2016 – the first annual increase since 2012.