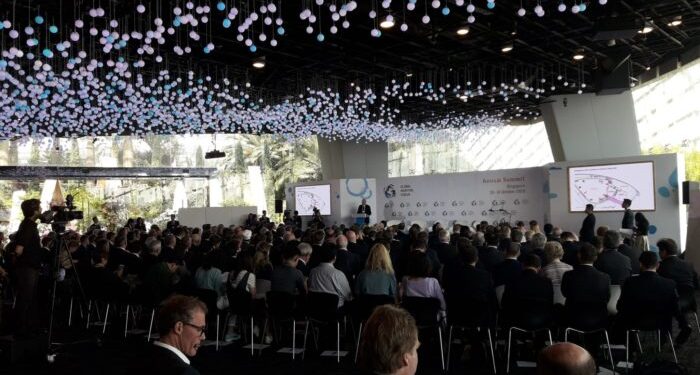 Chair of the Global Maritime Forum, Peter Stokes, has officially opened the Annual Summit in Singapore / Above image is used for illustration purposes only

The Global Maritime Forum launched its 2019 “Global Maritime Issues Monitor” report addressing shipping’s current issues, from the diversity in maritime workforce to a zero-emission industry, based on the results of a survey of senior maritime stakeholders from 46 countries, who highlighted the impact of the environmental regulations that are to be in force, piracy issues and the possibility that the global crisis may affect the maritime sector.

In light of the changing shipping industry, the respondents of the survey were asked a variety of questions, from environmental, to smart and safety issues, addressing the importance of keeping up with the changes and not lagging behind from the perspective of preparedness.

According to the report, in comparison to 2018, respondents feel more confident in dealing with safety incidents as the matter is becoming a priority in shipping’s agenda; Yet, stakeholders feel that there is still room for improvement.

Concerning fuel price increases, respondents are more prepared than 2018, as the upcoming environmental regulations have already pushed the industry to make changes in its fuels.

For many of these issues, it’s likely that the maritime industry is not alone in questioning its preparedness. Every sector is grappling these days with issues related to climate change, cyber-attacks, the ongoing technology revolution, and geopolitical concerns 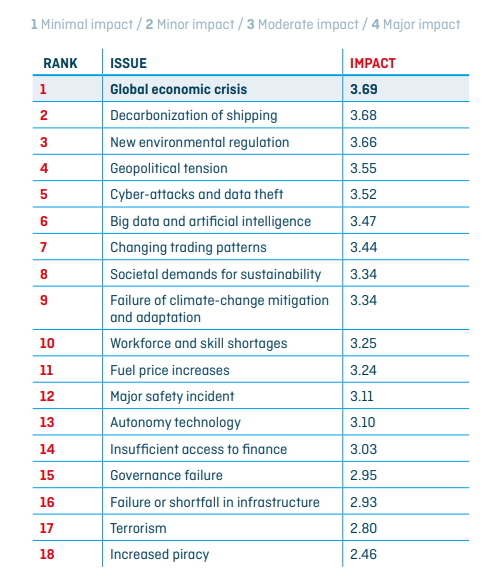 As presented on the table above, the top issue that will have an impact on  the maritime sector will be the global economic crisis. The issue is also considered one that the industry is least prepared for, although it is considered relatively unlikely.

According to Dr Ricaurte Vasquez Morales, Administrator of the Panama Canal,  although the potential that the global economic crisis will seriously affect the sector is low, still it is a major concern for all shipping stakeholders.

Moving on, the respondents noted as the second most crucial matter that they think will affect the industry the issue of decarbonization; It was also the issue for which they see the maritime sector as being generally unprepared.

The shipping industry pledged to a wide GHG target of reducing emissions by ‘at least’ 50% by 2050, in line with IMO’s GHG strategy.

In the meantime, respondents referred to the new environmental regulations as the issue most likely to occur in the next 10 years, while also seeing it as having the third highest impact. This is driven in part by the pending 2020 sulphur regulation, which represents a paradigm shift in fuel requirements — one that may well increase fuel prices.

Respondents identified geopolitical tension as another leading issue facing the industry, placing it higher on the maritime agenda than was the case in 2018, but also deeming themselves better prepared to face it.

Cyber attacks and data theft was been ranked fifth in terms of impact and third in terms of likelihood and preparedness, no doubt reflecting the maritime industry’s experience with major cyber-attacks in recent years.

Richard Smith-Bingham, Director of Emerging Risks at Marsh & McLennan Companies Insights highlighted that digitalization and automation will increase exposure points, also increasing the possibility of threats and cyber attacks, meaning that the shipping sector has to improve its cyber security measures.

2019’s survey revealed a new issue that respondents consider; Societal demands for sustainability, with respondents placing it low in preparedness. This issue addresses the urgency of collaborating efforts that will achieve today’s sustainability goals.

We are convinced that public opinion and demand for environmental concerns and sustainability will only increase in the future, critically influencing the parameters for maritime transport.

# The workforce of the future # 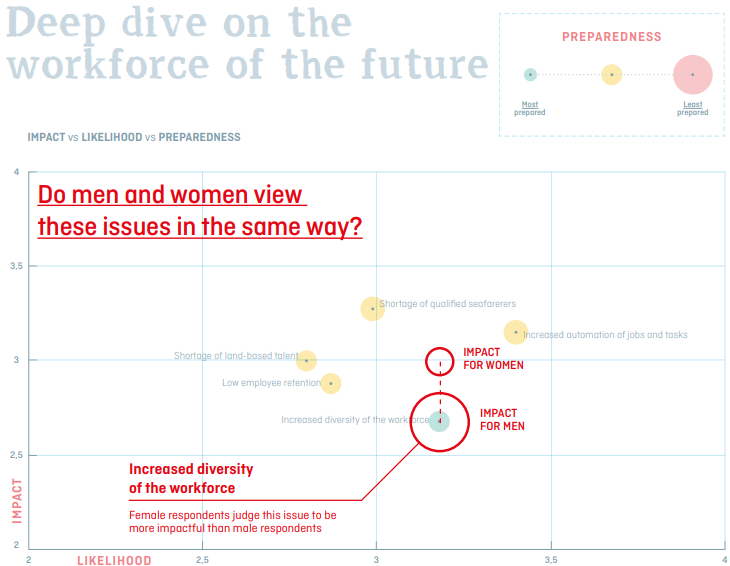 The industry today faces many challenges when it comes to the workforce of the future. The respondents of the survey did not rank workforce-related issues as high for impact, likelihood, or preparedness as they did for other areas. Still, preparedness was not as high as one would like, implying that unresolved workforce issues will lead to more serious problems in the future.

Although the industry is developing and making big changes, any maritime company that does not aim to workforce diversity will be left behind.

For the traditionally male-dominated maritime industry, current questions of diversity centre on gender

According to the report, despite the increased number of women being educated and trained in oceans and maritime programs, their engagement, retention, and promotion to leadership in all areas of ocean activities, particularly the maritime sector, has lagged.

Cargill’s Ying Ying Lim stated that the maritime industry is about to enter a critical decade, driven by change.

We will see opportunities that call for new skills and experiences, so candidates from other industries will bring valuable fresh perspective. We should be thinking about what needs and benefits will be required to attract these candidates and ensure that our industry is qualified to bring the outside in.

The Global Maritime Forum saw the most increased scores of unpreparedness when questioning respondents on a zero-emissions future.

Regulatory uncertainty is viewed by respondents as the biggest potential barrier to shipping’s decarbonization in the next 10 years, and is also seen as the most likely to occur and is in the top three for potential impact on shipping’s transition to zero-carbon emissions. 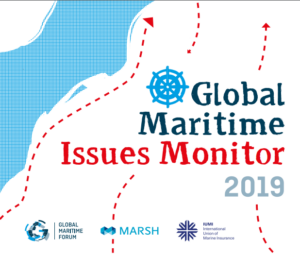