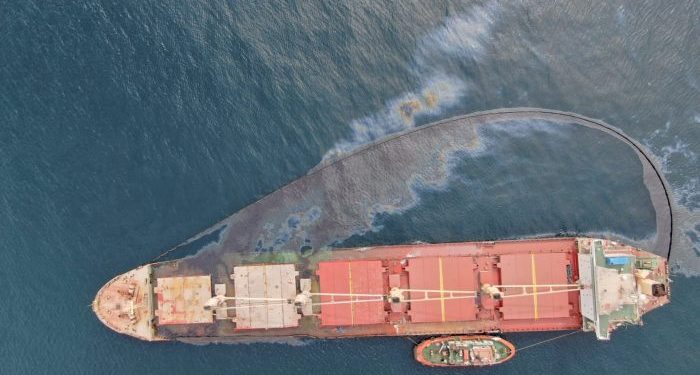 Salvage operations have started off Gibraltar to remove the wreck of the bulker OS 35, as the port aims to complete the removal process by May 30, 2023.

More specifically, the anchor handling tug Koole 42 along with Barge H-283 arrived in Gibraltar early in January from Suriname and after some initial preparations were positioned alongside the ship.

Work has now started with the removal of the first two of the four boom cranes aboard the vessel. The team is still working to remove two additional booms so that they would be able to gain access to the cargo holds.

According to information, port officials opened the cargo hatches and the first phase of the salvage operation is fully underway. This effort focuses on removing and then recycling the cargo which consists of a load of 33,632 tons of steel bars.

What is more, The Captain of the Port also announced that they have received confirmation that the tug Koole 31 towing barge K10030 have successfully departed from Brest on January 20.

Gibraltar had declared a “major incident,” as the hull of the bulker “OS 35” was ruptured. The declaration focused all the resources on managing the emerging disaster while the neighboring port of Algeciras was also informed and assistance from Salvamento Maritimo was requested.