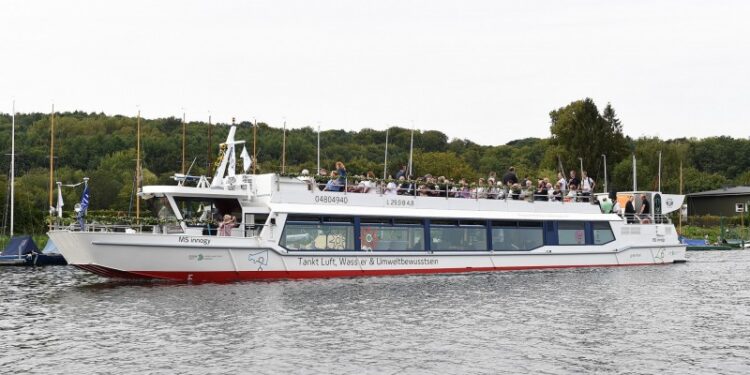 MS innogy, the first ship in Germany to be powered by an environmentally friendly methanol fuel cell, was christened and put into operation as a regular passenger vessel, in a formal ceremony, on Essen’s Lake Baldeney.

As the company explains, the energy required for the whole operation will come exclusively from renewable sources, having zero impact on the climate.

Carbon dioxide is filtered from the surrounding air and converted into methanol with the aid of electricity and water in a two-by-two-meter-high installation. In turn, a fuel cell uses the methanol to produce electricity on the vessel and supplies a battery-backed electric motor. The entire process is carbon-neutral and therefore does not negatively impact the climate. While in operation, the engine of the vessel only releases the amount of carbon dioxide that is filtered from the air for the production of methanol.

“The new MS innogy is the energy revolution that you can touch. However, it is also proof that we have the right strategy at innogy to find an alternative to oil as quickly as possible, by producing green fuels such as methanol with renewable energy and using them to drive environmentally friendly ships, aircraft and heavy goods transport,” said Peter Terium, CEO of innogy SE.

The scene of the methanol value chain demonstration project is the City of Essen – this year’s Green Capital of Europe. The new vessel will be used by Weiße Flotte Baldeney GmbH in the Green Capital year.

Thomas Kufen, Mayor of the City of Essen, said: “With this innovative project, Essen-based innogy SE is chartering new territory across Europe. Water, CO2 from the air and green power combine to form a climate-neutral energy source. These provide the ideal basis for a success story.“