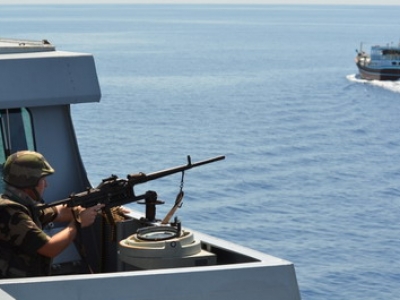 Germany plans to lobby other European Union countries to allow the deployment of private armed guards on their merchant ships in high-risk areas as a piracy crisis escalates, ministry officials said.

But analysts said the initiative was likely to face legal and practical difficulties.

Somali piracy is costing the world economy billions of dollars a year, and international navies are stretched to combat the menace in the Indian Ocean due to the vast distances involved. In desperation, more shipping companies are considering deploying private armed guards on their vessels.

The German government is looking into changing the country’s weapons laws to allow security personnel to bear firearms on ships in high-risk areas. It could also certify those private security companies that could be used on merchant vessels, a government official said.

“Our goal is to develop a coordinated approach to be presented at the International Maritime Organization (IMO) meeting in September, and EU governments are the main partners to bring on board,” said Jan Gerd Becker-Schwering with the German economy ministry. “To go this alone would not be beneficial.”

The European Union said allowing private armed guards on merchant vessels was a decision to be made on a national level, adding that ships should have best management practices (BMP) in place, including measures to prevent pirates from getting on board and to protect crew members.

“The implementation and execution of these BMPs, however, is the responsibility of the ship owners,” an EU spokesman said. “These private security contractors operate under the law of the
flag state.”

Separately the IMO said such a move was up to national governments but warned of a potential escalation in violence. “IMO does not endorse the use of privately contracted armed security personnel on board ships … and operators should take into account the possible escalation of violence,” the U.N.’s maritime agency said.

J. Peter Pham, with the Atlantic Council think tank, said the German plan could encounter legal setbacks, both domestically and abroad. “Despite the apparent reasonableness of the German proposal, it will face several hurdles,” Pham said. “It needs to pass both houses of the German parliament, where there will be opposition from the left, which tends to look askance on (what politicians tend to view as) ‘mercenaries’.”

Pham said it could prove difficult to convince foreign port authorities to allow armed groups into harbours. “Even if Chancellor (Angela) Merkel’s government gets the necessary laws enacted, it will be an uphill battle to convince the authorities in ports to allow the security teams in, much less to get other countries, especially in Europe, to follow.”

International Chamber of Shipping Secretary General Peter Hinchliffe said the German plan was helpful in setting a precedent for approving armed guards in flags where they were not currently allowed.

“But it must not create a mechanism for governments to abrogate their responsibility under UNCLOS to protect trade routes,” he said, referring to an international convention that tasks nation states with tackling piracy on the high seas. German ship owners’ association VDR said private armed guards were a “second-best solution” to deploying police or military forces. The German government has ruled this out.

“Using sovereign forces would not only pose financial and capacity problems, but we could only use them on ships that sail under the German flag,” Becker-Schwering said.

Ships are often registered under other flags than that of the ship’s owner in order to avoid taxes and regulations of the owner’s country.