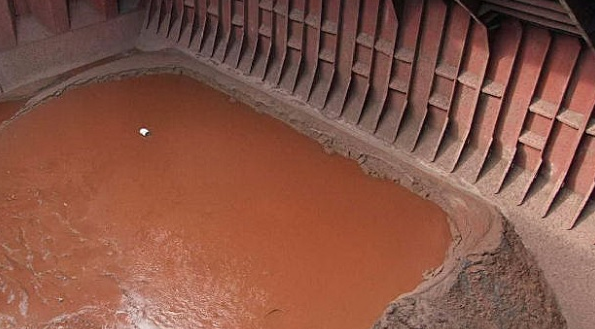 According to the Gard Club there have been reported new incidents where solid bulk cargoes classified as Group A, liable to liquefy, have been loaded with moisture content in excess of the transportable moisture limit (TML).

The Club reminds Members to remain vigilant when loading such cargoes and to have a low threshold for contacting the Club if they have any concerns or questions.

In the first case, the vessel was loading copper concentrates in Peru. The cargo was partially loaded when the Master observed pooling of free water in the holds and cargo spatter; i.e., cargo splashing up on the sides of holds when dropped from grabs. Both of these are considered red flags when loading Group A cargo. Re-testing revealed the moisture content exceeded the TML when loaded, and the values on re-testing were not in accordance with the cargo declaration. Investigations are ongoing however we note that the wet season in Callao is from December to April, with February and March experiencing the heaviest rain.

The second incident involved a Gard-entered vessel which loaded Iron Ore Fines from Ponta da Madeira, Brazil, bound for Praia Mole. The vessel took 2 days to load the nominated quantities with several rain interruptions during the operations. The cargo holds were closed during heavy rain, however the vessel continued loading during light rain. According to the master, the vessel developed a list to port 3 days into the voyage despite continuously pumping the cargo bilges throughout the voyage. Upon arrival at Praia Mole, the cargo in four of seven cargo holds had liquefied.

How to ensure optimal efficiency of purifiers onboard

The wet season in Brazil is typically December to April. From January to March 2022, torrential rains have been reported in various areas of Brazil, causing flooding, evacuations and state of emergency. Due to the frequency of iron ore shipments originating in Brazil, the Club recommends heightened vigilance for ships which have loaded recently or are fixed to load Group A cargoes from Brazilian ports.

For this reason, the Gard Club makes the following recommendations:

In addition, the impact of a bulk cargo liquifying whilst at sea can have catastrophic consequences as seen in a number of recent high-profile casualties, argues Carl Durow, Loss Prevention Manager, London P&I Club. The role of the P&I Club is to provide insurance against such events but also to provide advice to prevent them for occurring in the first place. Doing this, saves lives and helps protect the natural environment.

Following this situation, North P&I Club noted the benefits of the ‘Can Test‘. In fact, the Can test is a simple and useful check available to the ship’s crew. When performed correctly, it can help determine if a cargo might be unsafe.

If you have a Can Test result showing free moisture or fluid conditions, stop loading and seek expert assistance […]