In two enlightening webinars last month, experts from the UK P&I Club's Singapore office addressed the topic of bunker quality claims and the technical aspects of a fuel quality claim. They discussed many issues, from the various aspects of testing to compliance in order to provide feedback on doubts related to the practical and operational aspects of handling fuel.

The 1st Webinar was held on the subject of “Bunker Quality Claims”. It was moderated by Capt Anuj Velankar, Sr Loss Prevention Advisor with the UK P&I Club, who stressed on the need for the industry to keep an eye on the usual suspects of maritime hazards while the industry focused its attention on the challenges related to Covid-19.

The situation with bunker quality claims as he explained was particularly a tough one as this involved various parties from shipboard staff to owners, charterers and bunker suppliers who needed to work together and clearly understand their rights and recourses against each other.

On the panel discussing the practical aspects was Ansuman Ghosh, Risk Assessor at the UK P&I Club, who is based at Singapore. Ansuman Ghosh built up on his extensive experience at sea and in the classification society to lay the case that although there were a large number of M/E failures, it was not always related to poor maintenance of machinery, but often related to either bad quality bunkers or even problems with management of fuel on the vessel.

Ansuman covered various aspects of testing, including parameters as well as the various tests and the issues arising. Compliance issues with port state control was also discussed. Ansuman made the case that the fuel quality issues were notoriously difficult to deal with due the various type and parameters of fuels and testing around. As this was going to be part of the industry for the foreseeable future, it was important to align with reliable suppliers of bunkers.

Also on the panel was Kendall Tan, Partner with Singapore Law Firm Rajah & Tann. Kendall stressed on the need for shipowners to ensure that the terms in their charterparty clearly laid out the bunker standards and also the testing mechanisms to avoid disputes. For the charterers, it was necessary to distinguish their contractual chain between the bunker traders and the bunker suppliers.

There were also possible rights of recourses under tort which should be explored by ship owners and charterers. Kendall also clarified on the very important aspect of burden of proof and the need for shipowners to maintain proper documentation onboard the vessel to protect their interests.

The 2nd webinar held on 6th May was primarily a Q/A forum on “Technical aspects of a fuel quality claim”, following up from the 1st webinar. Anuj and Ansuman were joined this time by James Duncombe from CWA to answer the various queries raised by the audience. James is a Chemist with CWA’s Oil and Chemicals department.

There were queries related to various testing practices. Investigative tests such as GCMS testing pros and cons, repeatability and reproducibility issues. Adding to that, recently we are also seeing a number of cases related to piston ring and liner failures. How are these related?

James did a short presentation to explain these issues.  Ansuman raised concerns about the recent Main Engine liner damages and also hoped that the latest edition of ISO fuel standards are released soon to address the various concerns of the new VLSFO blends.

Since the questions raised during the webinars were many,  the Club subsequently issued FAQs to include all questions that were asked by online attendees during those webinars. To explore more, click herebelow 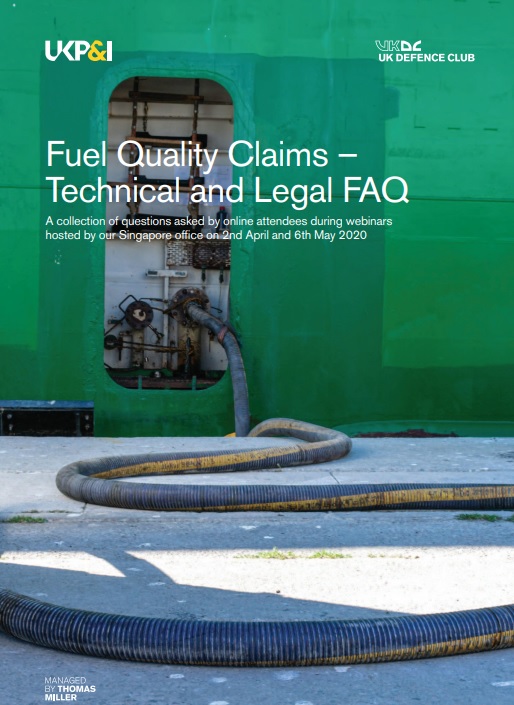