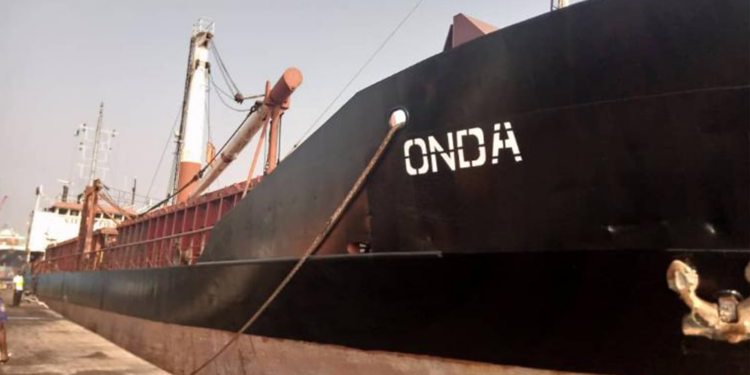 A total of four seafarers remain abandoned for one year without pay onboard the Togo-flagged MV Onda, in the port of Douala, Cameroon, according to information by ITF.

I have been working on this ship since 4 December 2019. After a voyage to Niger, we were lucky enough to earn a month’s salary. After that, as of now, we haven’t received any salary,

…one of the abandoned crew members says on video.

Union representatives boarded the vessel and confirmed breaches of the MLC. Seafarers were cooking fish on wood fires on deck and collecting rain water to survive. The ITF has had to step in and provide emergency provisions to the crew twice. Exceprt for the poor conditions onboard, four of the seven crew members allege their signatures on wage receipt documents have been forged and have also denounced the chief officer for abusive behavior.

The crew called on the ITF for help in September last year, but all correspondence with the ship owner, Amin Shipping, has proved futile over the last four months, the union noted.

The shipowner has no desire to pay our salaries. We are tired.  We don’t even have credit for phone calls,

On his part, the ship owner has written he was unable to transfer money from Lebanon due to economic crisis and Covid-19. He says has flown to Cameroon to pay the crew, denying any wage theft or forgery. Latest ITF information says the owner has just paid some $1600 in cash to the four seafarers, but they are still owed wages.

In addition, the owner claims there are no seafarers onboard, only watchmen who have no certification or seamen’s books, although the ITF have verified the four crew are, in fact, qualified seafarers.

In correspondence with the shipowner, the register of Togo demanded proof of any payment of crew wages and provisions. They called to account the owners over falsification of the ship’s insurance and classification, with the ITF reporting the crew abandonment to the ILO.

But the flag state has yet to make good on its promise of 25 September to suspend or expel the vessel from its register.

Steve Trowsdale, ITF Inspectorate Coordinator, says the Togolese register has failed to do its job.

This follows another case of exploitation onboard the MV Onda. In December 2018, Indian crew onboard the Onda said they were denied pay and rations. One seafarer, Mohammed Jubeen Khan, told media that the owner refused to pay their salary for 18 months.