In its weekly report for 25 February -2 March, ReCAAP ISC informed of four incidents of armed robbery against ships in Asia. All four were CAT 4 (least significant) incidents. Of the four incidents, one occurred in the Kutubdia Channel, Bangladesh; one at North Anchorage, Kakinada, India; one at Panjang Anchorage, Indonesia; and one in the eastbound lane of the Traffic Separation Scheme (TSS) in the Singapore Strait.

Attacks against ships in the Singapore Strait have been a key area of concern for global maritime security lately.

With this incident, a total of eight incidents occurred in the Singapore Strait since January 2020, all in the eastbound lane of the TSS.

Also, the weekly report includes an incident to an offshore supply ship outside Asia on 26 Feb, while at Luanda Inner Anchorage, Angola.

The incidents in Asia

While the tug boat towing barge Maritime Faith was underway in the morning of 28 February, about 20 perpetrators boarded the barge from three fishing boats.

The perpetrators eventually escaped with stolen items including lashing equipment, rope, manhole cover and steel stopper from the barge.

The incident was reported to the Bangladesh Navy and Singapore Port Operations Control Centre.

While at anchor, seven perpetrators in a dinghy boat approached and boarded the ship from the stern. They stole lube oil drums and escaped. The crew was not injured. 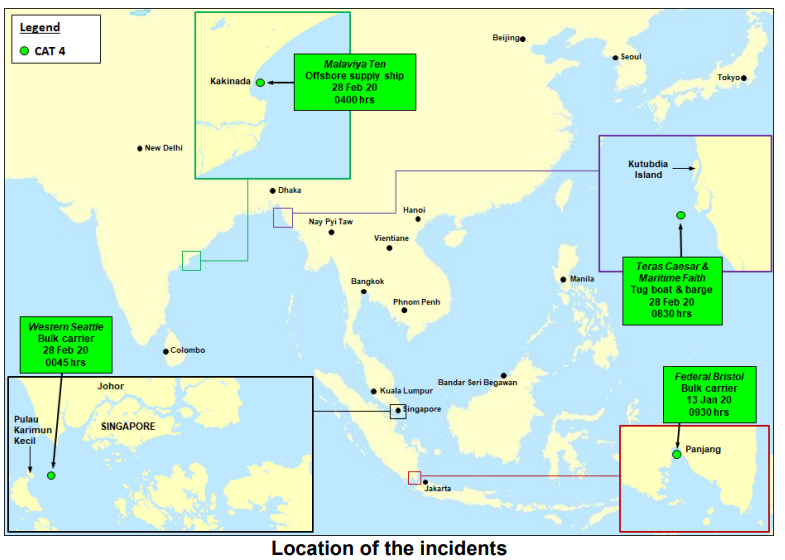 -The third incident involves the Philippines-flagged bulk carrier ‘Western Seattle’ on 28 February, about 3.5 nm east of Pulau Karimun Kecil, Indonesia in the eastbound lane of the TSS in the
Singapore Strait.

The crew informed the master who raised the alarm and mustered all crew in the wheelhouse.

There was no confrontation between the crew and perpetrators and nothing was stolen.

The Republic of Singapore Navy escorted the ship into Singapore and upon arrival, the Singapore Police Coast Guard boarded the ship to conduct a search. No perpetrator was found.

While anchored at Panjang Anchorage, Indonesia, the duty watchman onboard noticed the steering room lock was opened and ship's engine spares were missing.

The master reported the incident to the local agent.