The 2019 incidents for the first three quarters included:

At about 0532 hours, Jian Fa bulk carrier was sailing through the Singapore Strait towards China when an unknown number of perpetrators boarded the bulk carrier. The Singapore Police Coast Guard notified the Singapore Vessel Traffic Information System (VTIS), and around 0700 hours, the ship informed Singapore VTIS that a search on board the ship was conducted and there was no sighting of the perpetrators. The crew remained safe and there was nothing stolen from the vessel.

On the same date, at around 2325 hours, Jag Lalit tanker, was sailing through the Singapore Strait, going to Kaoshiung, Taiwan, China, when six perpetrators armed with knives boarded the ship. The fourth engineer was punched in the face, while the chief engineer sustained bruises on the neck and had a gold chain stolen from him. Therefore, the Captain informed the Singapore VTIS and sailed to Singapore to make sure that the crew was safe, prior to continuing their voyage.

In light of the event, the master reported it to the Singapore VTIS and resumed her passage to Singapore. 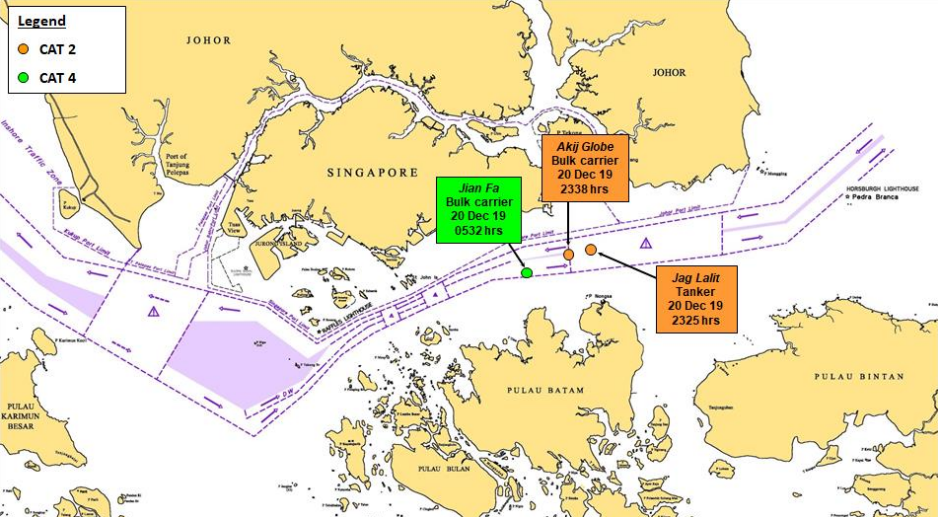 Specifically, on December 23 two incidents were reported in the eastbound lane of the Singapore Strait on the same day. Of the two ships that were boarded, one was a bulk carrier and one was a tanker. In both incidents, the attackers had the crew tied up.

On December 23, 2019, at about 0012 hours, a vessel named Bamzi was sailing in the Singapore Strait from Nipa anchorage, Indonesia to Qing Dao, China. That was when the Chief Engineer and the duty engineer saw three perpetrators in the engine room, one being armed with a knife. They immediately raised the alarm, but the perpetrators escaped. Later on, the men were found tied up by the perpetrators.

Following the investigation conducted onboard, there was no sign of the perpetrators being on the vessel. The crew was safe and unharmed, and the vessel continued its voyage.

On the same date, at about 0154 hours, a bulk carrier called Trust Star was transmitting the Singapore Strait when the crew spotted 6 perpetrators onboard the ship and raised the alarm. After te alarm, the perpetrators escaped; Yet, prior to their leave, they managed to confront and tie up two crew in the engine room, who later managed to untie themselves. 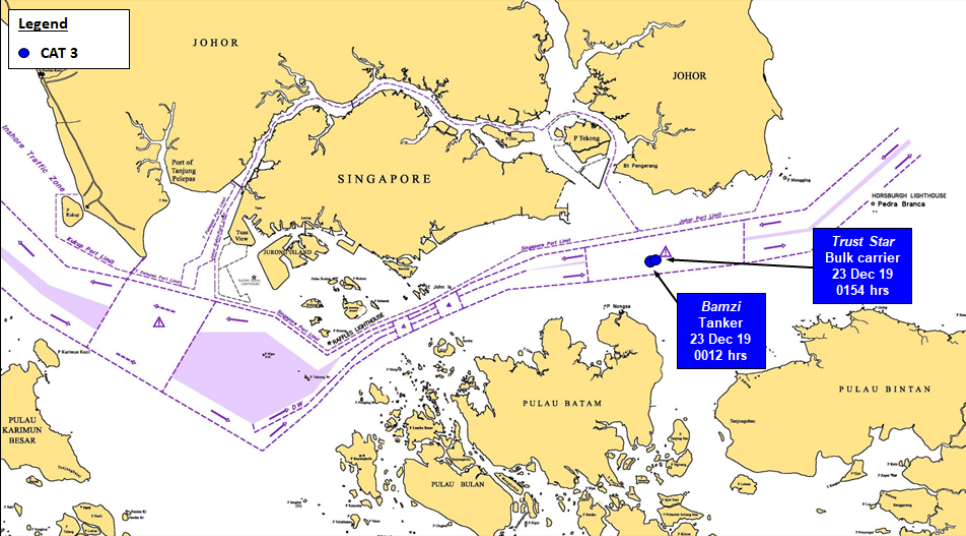 Recently, ReCAAP ISC had alerted that the situation in the Singapore Strait remains critical.

ReCAAP ISC advises all ships to exercise enhanced vigilance, adopt extra precautionary measures and report all incidents immediately to the nearest coastal State. The ReCAAP ISC recommends to the law enforcement agencies of the littoral States to step up surveillance, increase patrols and enhance cooperation and coordination among them in order to respond promptly to incidents.