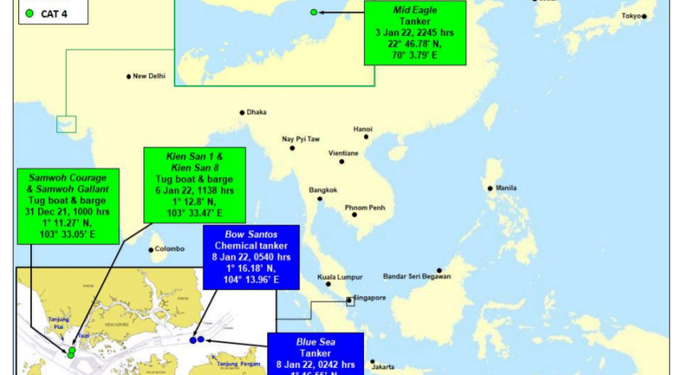 During 4-10 Jan 2022, five incidents of armed robbery against ships in Asia were reported to the ReCAAP ISC. Of the five incidents, four incidents occurred to ships while underway in the Singapore Strait, and one incident to a ship while anchored at Kandla Anchorage, India.

In fact, the two CAT 3 incidents occurred on board tankers while underway northwest of Tanjung Pergam, Bintan Island (Indonesia). Both incidents occurred on 8 Jan 22, with less than three hours apart. The perpetrators were armed with knives in both incidents. Nothing was stolen in one incident, and the ship master was unable to ascertain if there were any losses in the other incident.

What is more, the two CAT 4 incidents occurred on board barges towed by tug boats.The first incident occurred off Tanjung Piai (Malaysia) on 31 Dec 21 in the precautionary area of the Traffic Separation Scheme (TSS) in the Singapore Strait, and the second incident occurred southwest of Tuas Western Coast (Singapore) on 6 Jan 22 in the westbound lane of the TSS. Nothing was stolen in the first incident, but scrap metal was stolen in the second incident.

The CAT 4 incident at Kandla Anchorage occurred on 3 Jan. Ship stores were stolen.