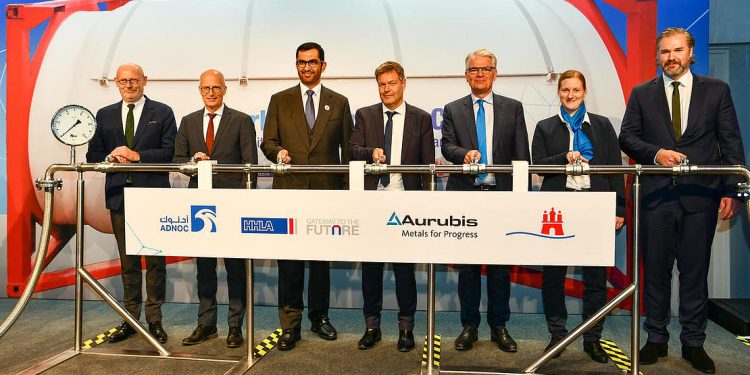 The first low-carbon ammonia test shipment from the United Arab Emirates (UAE) to Germany was successfully completed with its arrival at multi-metal manufacturer Aurubis.

In order to use hydrogen and its derivatives as an energy carrier on a large scale in the future, we need a reliable, climate-neutral and efficient transport chain from the producing countries such as the United Arab Emirates to the German and European customers

stated Torben Seebold, Member of the Executive Board of HHLA.

In March 2022, HHLA signed an agreement with Abu Dhabi National Oil Company (ADNOC) to test the transport chain for hydrogen from the UAE to Germany.

The hydrogen supplied by ADNOC was shipped in the form of the hydrogen derivative ammonia. In September, the first container arrived on a Hapag-Lloyd vessel at the Port of Hamburg and was handled climateneutrally at HHLA Container Terminal Altenwerder.

The ammonia of the first test cargo will be used by the Hamburg-based company Aurubis for test runs for the climate-neutral conversion of gas-intensive copper wire production, thus replacing fossil fuel in the long term. In the next months, more test deliveries of low-carbon ammonia will be shipped to other customers in Germany.