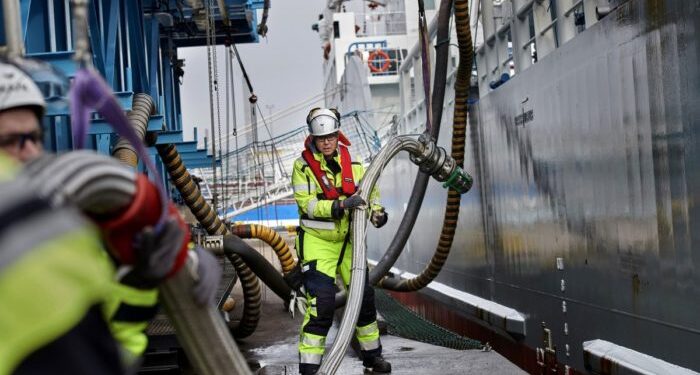 Swedish shipping company Terntank became the first operator to take on LNG and liquefied biogas (LBG) at the new bunkering facility at the Port of Gothenburg, on 27 November. Not only liquefied natural gas, LNG, but also liquefied biogas, LBG.

Sweden is an innovator when it comes to green shipping. Actually, Sweden has, up to today, the most climate-smart merchant fleets and is a role model for green shipping since Terntank, Swedish company, is the first operator to take on LNG and LBG at the new bunkering facility at the Port of Gothenburg.

The EU has made the bunkering facility a priority amongst the other projects in Europe. In partnership with INEA, EU has provided support to gain fruitful results from this project.

The new facility is the first in Sweden to enable tankers to bunker from a fixed pipeline as they load and unload, lowering the turnaround time. Also, in 2015, the Port Authority made an environmental discount on the port charge aiming to develop the number of calls by vessels run by LNG. As Jill Söderwall, Vice President Business Area Energy at the Port of Gothenburg, stated the discount played a major role for companies to switch to LNG. To this result, the Port Authority decided to extend the discount period to two more years, until 2020.

Moreover, the bunkering facility is one of a kind since it handles both LNG and LBG, which are identical when it comes to their chemical composition. In that way, the bunkering facility has a flexibility concerning the transformation of the shipping sector. Actually, during June 25 2018, the first-ever bunkering of liquefied biogas, ‘Fure Vinga’,  in Sweden, took place at the Port of Gothenburg and received 40 cubic metres of LBG directly from a road tanker.

The use of LNG enables shipping to move forward, be more environmentally friendly and escape from its reliance on oil. LNG is currently the cleanest marine fuel available due to its low emissions.

It should be mentioned that both LNG and LBG bunkered at the facility, were brought by the Norwegian Company Barents NaturGass which is an expert on gas distribution. The LBG was produced by FordonsGas at its facility in Lidköping north of Gothenburg.

According to Johan Zettergren, Chief Executive of Swedegas, the transition into LNG is increasing the proportion of renewable gas.

Mainly, LNG reduces emissions of  sulphur dioxide, whereas LBG  is a 100% renewable fuel produced from a variety of sources, including organic waste, and net emissions of carbon dioxide are zero.

Finally, the Port of Gothenburg is the biggest port in Scandinavia. Approximately, 30% of Sweden’s foreign trade comes through the port. Since 2015, it offers a discount to vessels powered by LNG.