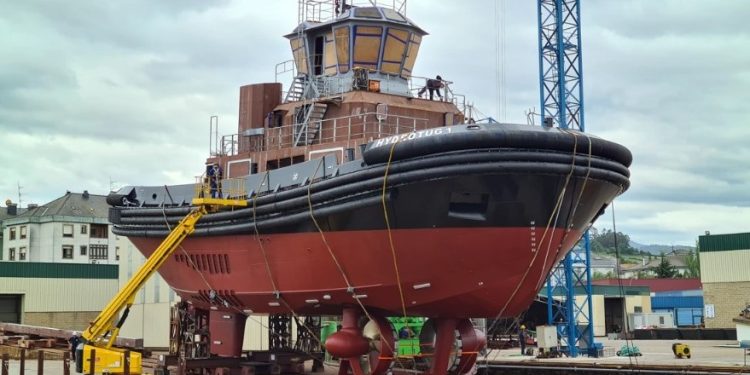 Port of Antwerp-Bruges and CMB.TECH will soon welcome the Hydrotug, the first hydrogen-powered tugboat.

The Hydrotug consists of two BeHydro V12 dual fuel medium speed engines that can run on hydrogen and traditional fuel. This development will be used by Port of Antwerp-Bruges as an important step in the transition to a sustainable, climate neutral port by 2050 and will be operational in the first quarter of 2023.

The Hydrotug will be powered by dual fuel medium speed engines, each providing 2 megawatts, with the latest EU Stage V emissions after treatment. The engines passed the necessary Factory Acceptance Tests (FAT) that validate the correct operation of the equipment.

The first water launch of the Hydrotug at Armón Shipyards in Navia Spain took place on 16th of May, and in the next few months the remaining construction works on the ship will be completed so sea trials can follow later this year. The goal is to deliver the Hydrotug by the end of this year and to have it fully operational in the first quarter of 2023 in Antwerp.

It is innovations such as these that ensure that our port continues to excel as the economic engine of Flanders. We look forward to the arrival of the Hydrotug in Antwerp towards the end of the year

said Vice Mayor for the port, urban development, spatial planning and patrimony of the City of Antwerp, President of the Board of the Port of Antwerp-Bruges – Annick De Ridder

Moreover, Port of Antwerp-Bruges Manager Operations – Rob Smeets, noted that the common goal is to become carbon neutral by 2050, by walking many different sustainability paths, such as carbon capture and storage, and efforts in hydrogen.

By 2028 our goal is to have the first green hydrogen molecules on our platforms. Moreover, we are investigating a hydrogen pipeline between the two ports and towards the European hinterland so we can use as much renewable energy as possible