by The Editorial Team
in Emissions, Fuels 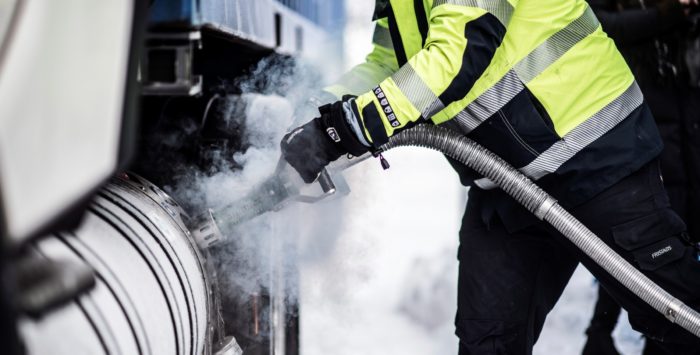 According to a recent statement, the Nordic gas filling stations network is expanding as Gasum opens its ninth gas filling station in Sweden and the first one in Umeå; the station will be able to serve both heavy-duty vehicles (HDVs) and passenger cars.

In fact, this is part of Gasum’s plan to build a network of 50 gas filling stations for HDVs by the early 2020s in the Nordics, further opening opportunities to answer to the increased demand for low-emission road transport.

As the gas station network expands, gas becomes available to more actors in the transport sector, which in turn increases the demand for gas. At the end of last year, we opened a new gas station in Östersund, which together with the Umeå station enables gas-fueled vehicles to be used across Sweden.

It is said that the new gas filling station is in an area with heavy traffic where fuel consumption is high as the need for clean fuel solutions is rising rapidly. Namely, the increasing amount of new stations is a key factor in reducing emissions, particularly in the long-haul road transport segment.

Heavy-duty transport currently accounts for up to 30% of Europe’s CO2 emissions from road transport.

According to the new emission standards passed by the EU in 2019, greenhouse gas emissions from heavy-duty vehicles (HDVs) are to be reduced by 30% by 2030. The national target in Sweden is to reduce road transport emissions by 70% by 2030, as compared to 2010 levels.

The Umeå station also provides liquefied biogas (LBG), which is produced according to the principles of circular economy from biowaste.

Being the first gas filling station in the region, it creates a base for further biogas investments in the area as well as offering a cleaner fuel solution for local companies and the municipality.

Recently, a new agreement between FordonsGas and Swedengas would enable the bunkering liquefied biogas (LBG) at the Port of Gothenburg. Under this agreement, the two mentioned companies will supply the fuel to vessels at the port. With renewable LBG, climate benefits will increase even further with the addition of net-zero carbon emissions.

With LBG, CO2 emissions can be reduced by up to 85% compared to fossil diesel. Notably, LBG can be used in the same infrastructure as LNG, making the shift to LBG easy and cost efficient.

Anna Säfvestad Albinsson, Project Leader at BioFuel Region AB, Umeå explains that “Biogas is a high-performance renewable fuel. New stations accelerate the usage of biogas-fueled vehicles, which is why the new station is not only important for the Umeå region but for Sweden as well.”

Johan Ebefors, CEO at Sandahls Goods and Parcel stressed that

Using cleaner fuel solutions is an important factor in Sandahls’ environmental strategy work. The new gas filling stations are vital since they enable us to reduce our emissions and meet our customers’ needs of having low-emission logistic chains. I’m glad that we’re able to use LBG-fueled trucks in Umeå.