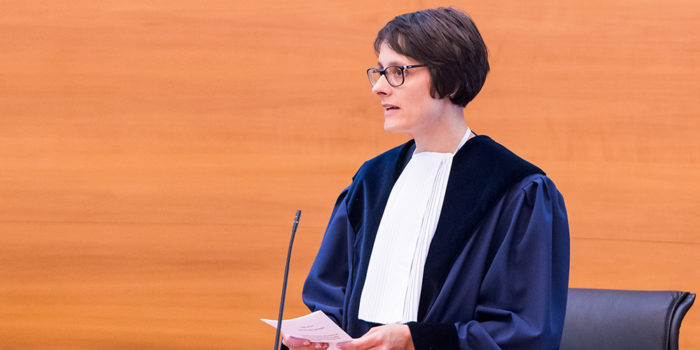 The appointment of Anna Petrig marks the first time that a woman has been appointed as judge ad hoc at the ITLOS. Among the 21 permanent judges of the ITLOS, only three are women: in 2011, the Argentine Elsa Kelly was appointed to the bench, and in 2017 Neeru Chadha from India and Liesbeth Lijnzaad from the Netherlands were elected.

Ms. Petrig has been involved in the Swiss-flagged San Padre Pio case where in January 2018, Nigeria arrested the vessel, which was to supply fuel to an offshore oil production platform off Nigeria.

According to the Nigerian authorities, the transport breached domestic law. Ship, crew, and cargo were seized. In Switzerland’s view, the ship was not in Nigeria’s territorial waters and therefore Nigeria did not have the right to detain it.

In May 2019, Switzerland began arbitration proceedings in this case and submitted a request for provisional measures to ITLOS in Hamburg. As the ITLOS has neither a permanent judge from Switzerland nor from Nigeria, both parties were allowed to appoint a judge ad hoc for this case. Switzerland appointed Prof. Dr. Anna Petrig as judge ad hoc.

In the case, ITLOS decided on the provisional measures. It decided largely in favor of Switzerland's request and ordered Nigeria to release the San Padre Pio, its crew and cargo. In order to protect Nigeria's rights, the tribunal has ordered Switzerland to post a bond or other financial security of USD 14 million. The ensuing arbitral tribunal will decide if a payment must be made to Nigeria from this security.

This is a historic case. Not only is this the very first time that a land-locked country has appeared before the International Tribunal for the Law of the Sea. The decision is also of a fundamental nature, as offshore uses in the so-called ‘Exclusive Economic Zone’ rapidly increase. For example, numerous offshore windfarms are being built as part of the energy transformation. With all these new uses of the sea, the question arises as to how far the respective powers of the coastal state and the flag state extend