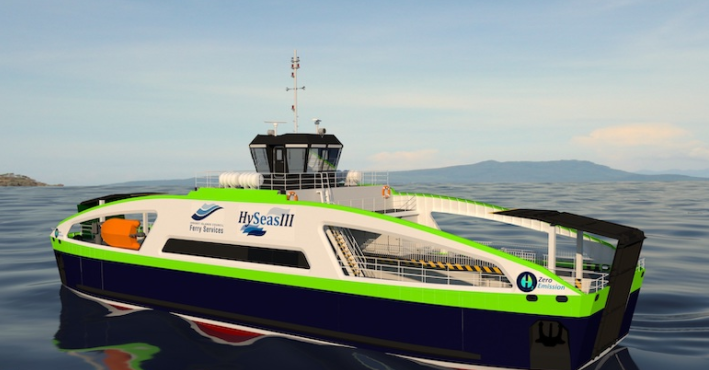 The first renderings of the Scottish-led HYSEAS III project, which aims to build Europe’s first sea-going ferry powered by hydrogen fuel cells, have been completed.

Following the announcement in June regarding the award of the ship design contract, consortium member CMAL and the AqualisBraemar LOC group have been hard at work designing the HySeas III hydrogen fuel cell powered double ended ferry.

We are proud to share the first results of their hard work below, which first debuted on stage at the 45thINTERFERRY Conference held from 2-6 October in Santander.

The drawings show what the vessel, which will store energy from renewable sources, is likely to look like.  As a double-ended sea-going passenger and car ferry, it will have capacity for 120 passengers and 16 cars or two trucks.

It has been designed to operate on the route between Kirkwall and Shapinsay in Orkney, where hydrogen fuel is generated through wind power, although it will be capable of operating at other ports where hydrogen could become available in the future.

“Seeing the concept designs brings the project to life. The vessel design is broadly based on our larger loch class vessels, which are double-ended. Once the designs are approved, we will move to the next stage of the project, which will see the build of the engine to be used in feasibility studies.

“The maritime industry has a key role in the global fight for climate change, and this project marks a step toward emissions-free marine transport.”…John Salton, Fleet Manager and Projects Director at CMAL said.

Dubbed the ‘HYSEAS III’ project, the venture is being funded by a European Union programme of the same name.

To remind, the HySeas III project will develop, construct, test and validate data in a full-sized drive train, the group of components that make up a motor vehicle, on land. If successful, it will pave the way for the first seagoing vessel that uses this fuel technology.