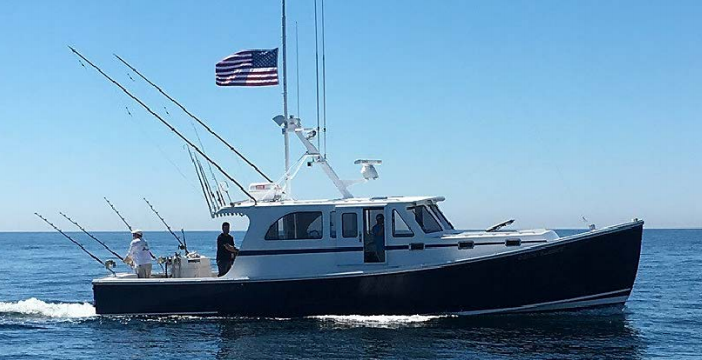 The US National Transportation Safety Board (NTSB) issued an investigation report on a fire and explosion incident onboard the fishing vessel 'Hit List' while in Merrimack River off Massachusetts, in August 2018. The investigation found that the fire was caused by failure of a hydraulic hose fitting. Meanwhile, the water used for firefighting efforts contributed to the vessel's sinking.

About 1725, on 24 August, a fire was detected in the engine compartment aboard the commercial fishing vessel Hit List, shortly after the vessel arrived at the Newburyport harbormaster’s dock to offload its catch.

The two owners on board attempted to fight the fire, but after smoke filled the cabin all four people aboard evacuated to the pier. The local fire department fought the fire using foam and water.

The fire was extinguished about an hour later when the vessel partially sank alongside the pier.

Approximately 100 gallons of diesel fuel leaked into the Merrimack River. No injuries were reported, but damage to the vessel was estimated at $550,000.

After the fire, the fitting was found to be broken off from the hydraulic block, and it most likely sprayed hydraulic fluid when pressurized onto the surface of the main engine turbocharger and ignited when the exterior surface heated up while the vessel was underway.

The fire eventually spread to other areas of the engine compartment and filled the cabin with smoke.

It is unknown when the fire started. The pot hauler system was last used to haul in the anchor about 4 hours before the transit to Newburyport.

If the hydraulic fitting had broken during this operation, then pressurized oil could have been sprayed onto the engine and remained there as the engine generated heat throughout the transit.

Flooding occurred on the Hit List because of water used in suppression efforts and because of holes burned through the wet-exhaust hose from the heat of the fire, which allowed seawater to flood the engine compartment from the exhaust outlet on the port side of the vessel. 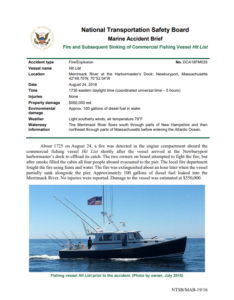