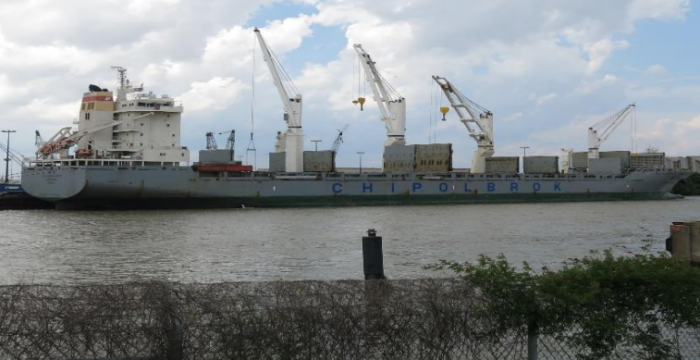 NTSB published its report on the fire that took place on board the cargo ship Chipolbrok Moon, on May 23, 2018. The fire occurred while the ship was moored at the Industrial Terminal West in Greens Bayou in the Port of Houston, Texas.

On May 21, the Chipolbrok Moon arrived at Industrial Terminal West in Houston. After the ocean voyage and before offloading the cargo, the steel sea fastener tabs used to secure the turbine components had to be removed by cutting, using an oxygen/acetylene torch.

The next afternoon, a marine chemist tested the atmosphere in cargo holds no. 2 port, no. 3 port and starboard, and no. 4 starboard for oxygen content and presence of flammable vapors to determine if it was safe to carry out hotwork.

After testing the cargo holds, the marine chemist issued a certificate concluding that the cargo holds were 'safe for workers and safe for hotwork' and noted that the scope of work was to 'high cut' sea fasteners, avoiding cutting directly on the decks.

He also noted that fire watches were to be posted in the upper and lower holds throughout, hotwork was to be performed 1 foot off untested spaces and hollow structures, hotwork areas needed to be at least 35 feet (12 meters) away from flammable and combustible materials, and the crew was to maintain gaps separating 'tween deck pontoons covered with dunnage/fire blanket during hotwork.'

The second officer completed a hotwork permit, which the captain and the chief mate signed. The permit said that the crew had addressed all 12 of the listed requirements, including, among others, that the work area was clear of combustible materials and tested for oxygen, firefighting equipment was ready for use, and a work permit had been submitted to a local authority.

Later that evening, an enclosed space entry permit was completed, and the ship’s fitter started cutting away the welded steel tabs in portside cargo hold no. 3 on the pontoon upper tween deck. An oiler and a deck officer were assigned as fire watches, and a dry powder fire extinguisher and garden hose were on hand.

The crew had placed narrow strips that had been cut from larger fiberglass welding blankets over the gaps in the pontoons. They had not placed blankets under the cargo skids because of the low clearance to the decks. The mechanical ventilation system in the cargo hold was not energized, as there was no forced ventilation in the hold. The cargo hold had two recessed flood lights on the outboard bulkhead on the upper level and fluorescent lights in the access trunk and aft ladder. With the pontoons in place, no lighting illuminated the lower tween deck and lower hold decks. The fire watch said that the crewmembers were using flashlights to see in the cargo hold.

The fitter, oiler, and second mate stated that they waited for about 25 minutes in the port cargo hold after completing hotwork and then went to the starboard cargo hold via the openings in the longitudinal bulkhead. A few minutes after entering the starboard hold, the oiler smelled smoke, and about the same time, the fire alarm went off.

He then mustered the crew, directed the access manholes to be closed, and directed the third mate to release 60 bottles of CO2 from the vessel’s fixed fire-extinguishing system into cargo hold no. 3. After the CO2 was discharged, the crew monitored the bulkhead temperatures in cargo hold no. 3 and confirmed that they were not rising. The crew continued monitoring for the next 8 hours.

After the accident, the captain called and emailed the company offices in Houston and China but did not make any other notifications to the port or the Coast Guard, nor did he make any radio broadcasts during or after the fire, despite the fact that the ship’s response plan required to do so. The vessel’s response plan required quarterly training, but available records did not indicate that the crew had completed this training in the months prior to the fire.

The National Transportation Safety Board determined that the probable cause of the fire aboard cargo vessel Chipolbrok Moon was the crew’s lack of compliance to the company’s safety management system and the marine chemist’s instructions pertaining to hotwork precautions. The latter allowed sparks and slag to fall through unprotected gaps between the removable decking pontoons and ignite the dust-protective covering of the transmission hubs.

See further details into the accident in the PDF herebelow 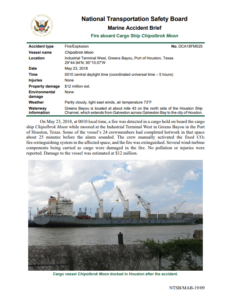