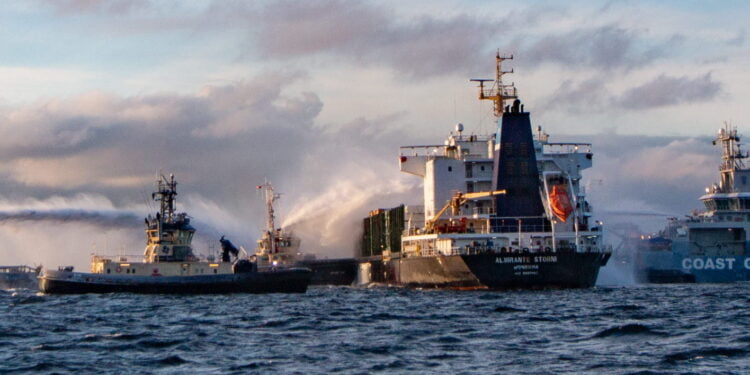 Following the fire incident onboard ALMIRANTE STORNI, Swedish Coast Guard is continuing to douse water on the burning vessel off the Swedish island of Vinga, near Gothenburg.

As a coast guard spokesman told Reuters, drones are being used to monitor the fire while there have been no injuries. However, the harsh weather has made work more difficult.

“It is worrying. Time passes and the weather is rather tough on site,” he said, adding that fuel tanks have not yet been affected and that there is no imminent risk of an oil spill.

To remind, the fire broke out in the ship’s cargo of timber on Saturday and has been burning ever since as the ship remains at anchor off Vinga.

An update Monday from the Swedish Coast Guard said the fire is continuing to burn with “undiminished strength,” but the fire is not believed to be spreading nor has it spread to the ship’s itself.

Nice pictures of the Swedish Coast Guard of the #fire aboard the M/V Almirante Storni Off #Sweden. #scheepsbrand #scheepsbrandbestrijding #gCaptain #Kustwacht pic.twitter.com/KYP0iNyslP

The Coast Guard’s two largest vessels, KBV 002 Triton and KBV 001 Poseidon, continue to fight the fire along with tugboats and assistance of the Sea Rescue Society.

“The ship contains large amounts of fuel and MSB has started preparations to be able to support with resources in case of a potential leak,” the Swedish Civil Contingencies Agency (MSB) said in an update on Sunday.

Seventeen crew members are believed to remain on board the vessel as firefighting continues. The Coast Guard said both the crew members and fuel tanks are at the ship’s stern, while the fire is burning closer towards the bow.