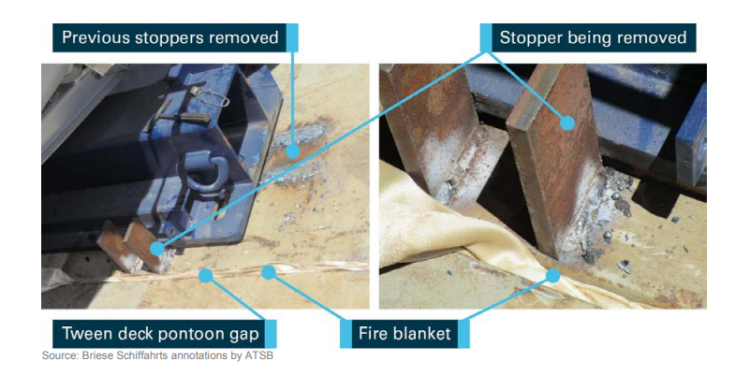 The ATSB issued an investigation report on the fire onboard the general cargo ship ‘BBC Xingang’, while berthed at Mayfield number four berth in Newcastle, New South Wales, in December 2017. The incident highlights that, prior to hot work, cargo coverings should be carefully assessed and adequate protection against damage or fire due to hot material should be provided.

At about 0600 on 11 December, a site supervisor and a boilermaker from a local engineering firm (Varley) boarded the ship. The process of removing the stoppers was discussed along with the safety measures and procedures to be followed.

At 1015, the boilermaker began removing the stoppers. The port captain asked that sparks be directed away from the cargo to protect the component surfaces. This request, in some cases, resulted in the sparks being directed toward gaps between the tween deck pontoons.

The work continued as expected and, at 1100, the boilermaker stopped to relocate to the next stoppers on the tween deck. As part of checking the new work area, he lifted a fire blanket and could see small flames and smoke in the lower hold through the gap in the tween deck pontoons. He immediately raised the alarm. The lower hold fire watch was notified on the radio. At the time he was notified, he was not near the area directly under where the work was being conducted. After moving to the relevant area, he quickly extinguished the fire using the water hose and water spray.

An inspection of the work site following the fire identified that molten metal and other hot material produced by the hot work had burned through the fire blankets. This hot material fell onto the material covering the cargo in the lower hold, resulting in the fire. As a result of the fire, the material covering the cargo was damaged and some surface blemishes were apparent on the cargo itself. No other damage was reported. Subsequent inspection of the cargo covering material found it to be 100% polyester transport cloth with a maximum rated temperature of 200 °C.

INTERCARGO: Net-zero by 2050 can only be achieved with alternative zero carbon fuels

Risks and opportunities of aligning with 1.5 degrees