Transport Malta's Marine Safety Investigation Unit (MSIU) issued an investigation report on a garage fire onboard the yacht 'MY Kanga' while at anchor off Croatia, in September 2018. The investigation concluded that in all probability, the seat of the fire was the Lithium-ion batteries. Transport Malta recommended a review of the Commercial Yacht Code of 2015 on the storage of Li-ion batteries, as well as close ventilation systems.

MY Kanga was at anchor in the coastal area of Dubrovnik, Croatia, on the morning of 7 September 2018.

While the first officer was on the bridge, the fire panel gave off an alarm, indicating a fire in the garage.

He immediately went down to inspect and was overwhelmed by the presence of heat and smoke in the garage.

The main fire alarm was triggered and the first officer called all crew and passengers to muster at the bow.

An attempt was made to fight the fire; however, it was unsuccessful. The fire rose towards the upper decks and subsequently grew out of control.

The master retrieved all the documents and passports of the crew and shut off all watertight compartments from the bridge.

He then gave the ‘abandon ship’ order, called off the boundary cooling, and ordered the chief engineer to shut off all fuel valves and the generator from the fire locker located on the starboard side of the yacht, before leaving the bridge.

Following a final head count, the forward tender was launched, with the child inside. All crew members and passengers then jumped into the water off the bow of the yacht to board the tender. No injuries were reported.

Shortly after, further explosions were heard, however, by this time, the tender along with all crew and passengers, was at a safe distance from the burning yacht.

-the flag State Administration to: 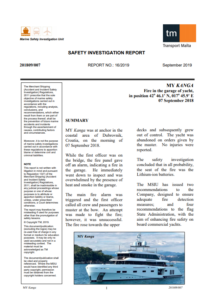