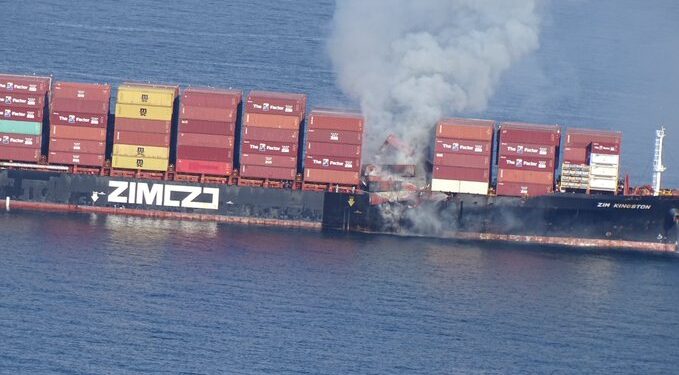 The containership Zim Kingston lost 40 containers overboard on October 22, off the Juan de Fuca Strait, between Canada and the US south of Vancouver Island.

After the incident, the Coast Guards of both countries issued warnings for ships in the area to be careful of floating containers. However, the US Coast Guard located eight of the containers and is tracking them as they head north.

What is more, the vessel was anchored about eight km off the coast of Victoria, when some containers caught fire on October 23. Due to the fact that two of the burning containers hold potassium amylxanthate, the Canadian Coast Guard said responders could not apply water directly to the fire. For this reason, they cooled the ship’s hull with water.

Commenting on the incident at the CBC News, Danaos Shipping, the manager of the ship, said that the ha been container, with ZIM Integrated Shipping Services, which operates the vessel, mentioning that the ship itself was not on fire.

Danaos has now commissioned a salvage and fire extinguishing agency to come on board in order to ensure that conditions are appropriate for the safe return of the vessel’s crew.

Furthermore, sixteen crew members were evacuated from the ship, while five stayed on board to help with the fire-fighting effort.

All fires produce toxic substances. Incident Command has detailed information on the chemicals that were on fire and are now smoldering in the containers onboard the #ZimKingston. pic.twitter.com/jtjhlJ1zAa