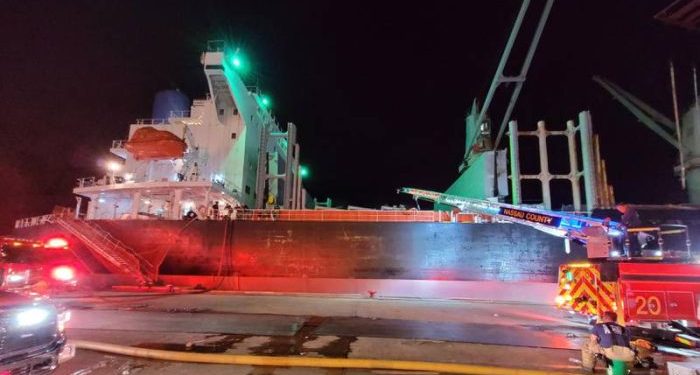 Two fire departments in Nassau County, US came together after a fire broke out inside the cargo hold of a large ship docked at the Port of Fernandina’s north terminal pier.

The Fernandina Beach Fire Department and Nassau County Fire Rescue responded to the call on June 26. When they arrived firefighters found a 600-foot cargo ship with heavy smoke coming from one of the ship’s five cargo holds.

The ship’s crew was attempting to extinguish the fire with onboard fire suppression lines, but had no luck.

There were no reported injuries to the ship’s crew. One firefighter was transported to Baptist Medical Center Nassau with a non-life-threatening injury.

Officials said the fire had started within the number five cargo hold loaded with stacks of bundled plywood being unloaded at the port. The cause of the fire is under investigation by the United States Coast Guard Investigations Division.