Transport Malta’s MSIU issued an investigation report on a fatality and another serious injury of two crew members onboard the Maltese registered bulk carrier MV Balgarka, while involved in hot work in dry-docking at the Bulyard Shipyard, Bulgaria, in October 2018.

While working inside the forepeak tank, a fire erupted inside the space. One of the fitters managed to escape from the space, albeit with serious burn injuries. The second crew member on the lower platform was unable to escape and was later found at the bottom of the space.

At about 0900 on 28 October 2018, both crew members were inside the forepeak tank and hot work was being carried out on the lower platform.

The fitters organized their work, started ventilation by means of shore supplied compressed air, and switched on the illumination by portable lights from vessel store.

Fitter 2 was slightly delayed looking for a large wrench to free the jammed valve shaft.

When he reached the lowest platform (no. 5) inside the forepeak, fitter 1 had already started heating with the acetylene torch, while fitter 3 remained at the upper platform.

While fitter 1 started heating the valve shaft with the acetylene torch, fitter 2 was behind him, about 1.5 m away and was not able to see directly the work being carried out.

Soon after the commencement of the hot work, it was reported that a significant volume of fumes started to be generated, prompting fitter 1 to shout to fitter 2 to run.

Soon after, both fitters’ clothes were on fire; while fitter 2 managed to reach the ladder and climb up to the upper platform, fitter 1 did not manage and remained trapped inside the bilges of the forepeak tank.

The safety investigation considered two scenarios of fire ignition; either oxygen coming in direct contact with oil and grease, or oxygen enrichment inside the forepeak tank on the face plates of the forepeak bottom girders (platform no. 5). 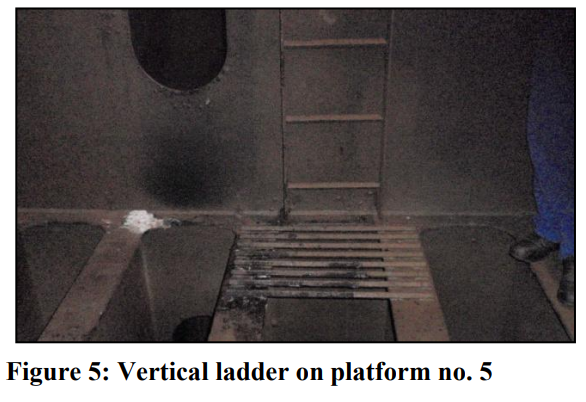 The checklist “Permission for Entry in Confined Space”, dated 27 October, specified that all relevant requirements had been fulfilled, along with triple measurement of atmosphere, allowing entry and hot works for three fitters between 0800 and 1700.

During the course of the safety investigation, the company took the following safety actions: 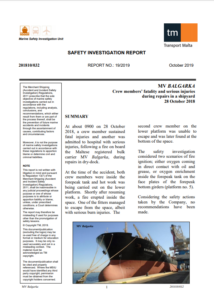