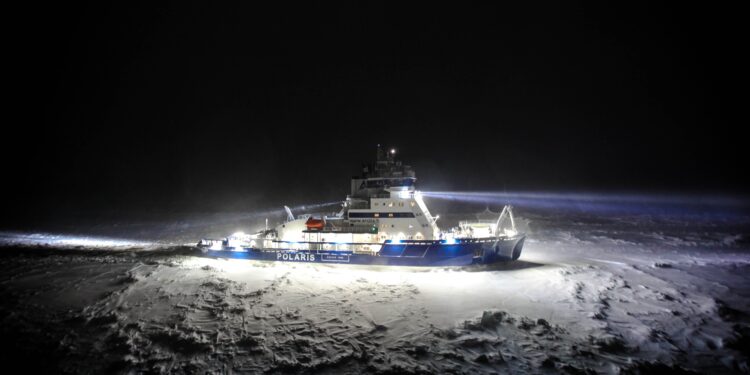 Icebreaker Polaris at night in the Bothnian Bay during winter 2017 / Credit: Arctia / Photo by Patrik Barck

Arctia’s LNG-fueled icebreaker ‘Polaris’ departed the icebreaker base in Helsinki on 30 January 2018, as the Finnish icebreaking season’s third icebreaker. The vessel will first head to Pori Tahkoluoto to refuel LNG and then to provide maritime transport to the Bothnian Bay in the Baltic Sea.

Two sister icebreakers departed earlier, the ‘Kontio’, on 18 December and the ‘Otto’, on 9 January, and they are already providing assistance in Bothnian Bay.

“The crew is very excited to begin icebreaking duty after a long summer and autumn. First we will bunker 700 cubic meters of LNG in Pori. Then we’ll join IB Kontio and IB Otso assisting traffic in the Bothnian Bay,” exlains Pasi Järvelin, Master of IB Polaris.

Built in 2016 by Arctech Helsinki Shipyard, the vessel is the most powerful icebreaker ever to fly the Finnish flag and also the world’s first icebreaker to feature environmentally friendly dual-fuel engines capable of using both low-sulfur marine diesel oil (LSMDO) and LNG.

‘Polaris’ was initially ordered by the Finnish Transport Agency, but the ownership was transferred to the state-owned icebreaker operator Arctia after delivery.