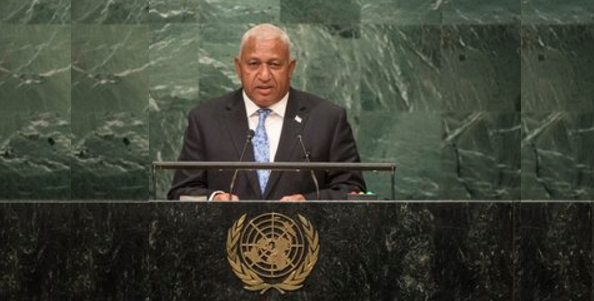 The Prime Minister of Fiji,Voreqe Bainimarama, has undertaken a few key priorities for his country’s Presidency of the UN Climate Change Conference in Bonn in November (COP23), calling for steeper cuts in greenhouse gas emissions and to ramp up the finance developing countries need to green their economies and build resilience to the inevitable impacts of climate change.

Addressing his country in a New Year message in January, he said he would work to “get the world to sit up and take notice” of the unprecedented threats that climate change is posing to his and other vulnerable countries.

“As your Prime Minister, I will be guiding the deliberations of almost 200 countries as we gather in Bonn, Germany, in November to continue to seek a more decisive response on the part of the industrial nations. And to set aside funds to enable developing countries such as Fiji to adapt to the changes to their way of life that have been caused through no fault of our own. In the months before that, I will be travelling the world to forge a consensus on the best way forward. And we will be holding a very important Pre-COP high-level gathering here in Fiji in October before the main Bonn conference the following month.”

For Fiji, both climate action and the broader issue of oceans are particularly important this year. The plight of oceans will be highlighted at a special Oceans Conference organized by the UN in New York in June. Voreqe Bainimarama said:

“First of all, I see it as my overriding responsibility as the leader of our nation to secure the future of the Fijian people. To protect our environment, our land and seas, not only for the sake of every Fijian today but for the generations to come. Nothing is more important than this. Because if we can’t defend ourselves against extreme weather events and the rising seas; if we can’t protect our seas and our marine resources, then all our efforts to develop our nation will be jeopardised. Everything depends on our ability to get the world to sit up and take notice of the unprecedented threat we currently face to our way of life. We must persuade the industrial nations to pursue more radical action to reduce their carbon emissions that are causing global warming. We must get the world to stop degrading our oceans and seas.”