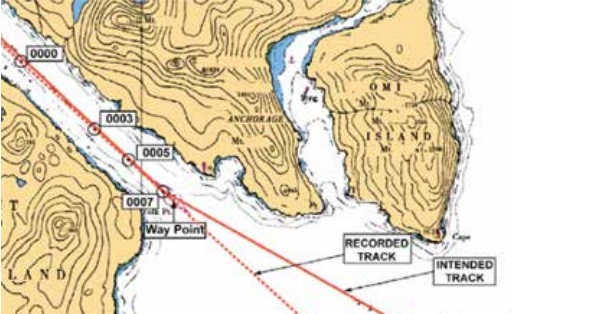 The Nautical Institute has issued Mars Report regarding an accident in which a passenger ferry hit island and then sank.

A passenger ferry loaded with 22 vehicles and with 59 passengers on board had left port earlier in the evening and was en route in semiprotected VTS coastal waters. In darkness and with good visibility, the vessel was steering on autopilot and the OOW and a quartermaster were on the bridge. At about midnight, a course adjustment of 4° to port was made to keep the vessel on track.

A few minutes later, the OOW reported their position to VTS; he subsequently logged his communication then resumed an ongoing conversation with the quartermaster. At about this time, they encountered a squall of heavy wind and rain, and reduced visibility. About five minutes later the vessel, making way at about 17 knots, had arrived at a course alteration point, but the 20° alteration to port was not made. As the vessel proceeded, the OOW and quartermaster apparently sat in their chairs next to the radar and forward steering station, respectively, and conversed intermittently for the next 12 minutes. When the vessel was about 13 minutes past the planned course-alteration point the visibility had improved. At about this time both the quartermaster and the OOW saw trees off the starboard bow.

An emergency turn to port was initiated but the vessel nonetheless struck the island then drifted north. The vessel took on water and quickly began sinking. Abandonment of the vessel was necessary. Two persons were reported missing and were subsequently declared deceased.

The investigation established, among others, that just prior to the planned course change the OOW’s routine was interrupted by several events that were taking place simultaneously, including:

In dealing with the immediate requirements of these events, the OOW was probably distracted at some point between logging the radio communication and ordering the course change. As a result, he believed he had called for and verified the course alteration, but this was not the case. In addition, the electronic chart system (ECS) display was dimmed and the audible alarms had been deactivated, thereby negating any warning that may have been provided by the waypoint alarm.

Lessons learned
The bridge team did not observe a number of basic principles of safe navigation including: