FEBIMA Investigation: Insulation panels contaminated with oil cause fire onboard 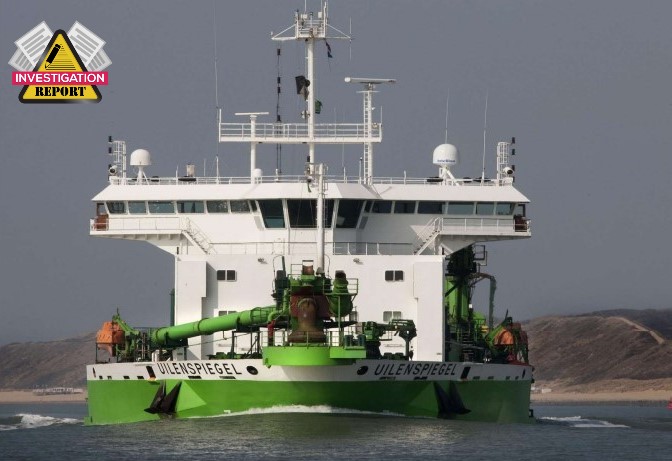 Belgium’s Federal Bureau for the Investigation of Maritime Accidents (FEBIMA) published its investigation report into the fire that broke out on board TSHD UILENSPIEGEL, that caused minor damage to the engine room.

On January 26th, 2021,TSHD UILENSPIEGEL was moored at pier 0 at Lisnave shipyard, Setubal, Portugal. The vessel was afloat again after a period in dry dock where maintenance had been carried out, including an overhaul of the vessel’s main engines.

The ship’s crew had been involved in the overhaul task, together with shipyard personnel and a service engineer of MAN, the manufacturer of the main engines. On January 26th, in the morning, the running in of the main engines commenced.

At 12:00 hours, the running in of the main engines was stopped for a lunch break. Reportedly, nothing unusual had been observed so far. After lunch, the running in started again and continued as foreseen.

At 15:15 hours, the PS main engine started smoking and very shortly thereafter, flames were observed at the exhaust of PS main engine in the engine room. The engine was stopped immediately.

The fire alarm was activated and all crew and subcontractors assembled at the muster station. At that moment, white smoke was coming out of the funnel. Initially, one subcontractor who was working in the engine room, was missing.

He was located within a minute and from that moment onward, all persons on board were accounted for. Subsequently, all ventilation of the engine room was stopped and the fire flaps were closed.

The Master instructed the shipboard fire team to gear up the firefighting equipment. The other crew was instructed to cool down the outside decks above the engine room.

Whilst the shipboard fire team was getting prepared, the shipyard fire team arrived at the muster station on the ship’s main deck, waiting for further instructions from the Master.

Meanwhile, the auxiliary engine shut down due to a lack of air because the fire flaps were closed. Subsequently, the switchboards blacked out and the emergency generator kicked in and took over.

When the shipboard fire team was geared up, they proceeded through the PS passageway towards the pump room, a space adjacent to the engine room.

The fire team was accompanied by the chief engineer and the Master. By means of two-way handheld radios, communication with the ship’s officers, located on deck and on the bridge, was maintained.

Next, it was decided to observe the situation inside the engine room. The watertight sliding door between the pump room and the engine room was opened ajar

Smoke was observed inside the engine room, but no flames were visible.

After closing the watertight door again, the Master, the chief engineer and the fire team went back to the main deck, where the Master held a debriefing regarding the situation in the engine room.

The fire was caused because insulation panels contaminated with oil were installed during the re-assembly of the main engine. In addition, insufficient control measures were in place to verify the condition of the insulation before installation.

What is more, according to the report, the oil ignited when the temperature in the exhaust line increased during the running in of the engine. In fact, the contamination with oil happened when the insulation was stored unprotected under a thermal oil line.

Continuing, the investigation discovered that during maintenance of the oil line, an oil spill occurred and contaminated the insulation. The maintenance on the thermal oil line was not properly prepared and thus contributed to the accident.