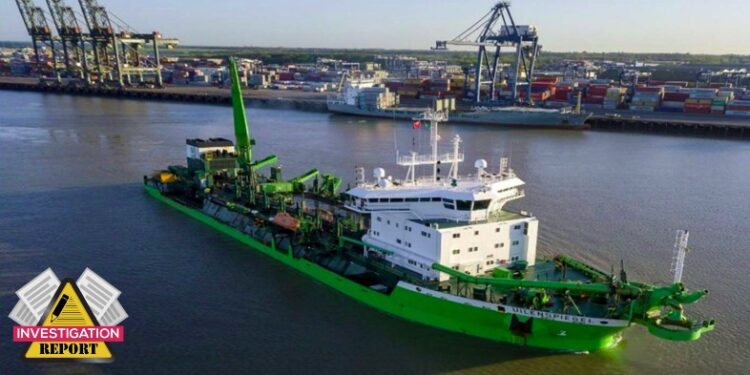 Belgium’s FEBIMA issued an investigation report on a fire onboard the Trail Suction Hopper Dredger ‘UILENSPIEGEL’ while moored at Lisnave shipyard, Portugal, in January 2021. Investigation established that insulation panels contaminated with oil were installed during the re-assembly of the main engine after dry-dock.

On January 26th, 2021, Trail Suction Hopper Dredger UILENSPIEGEL was moored at pier 0 at Lisnave shipyard, Setubal, Portugal. The vessel was refloated again after a period in dry dock where maintenance had been carried out, including an overhaul of the vessel’s main engines.

During the running-in of PS main engine, smoke appeared and fire broke out at the exhaust of PS main engine. The engine was stopped and the fire emergency response plan was activated. The shipboard fire team observed the situation under command of the Master and the chief engineer.

The fixed fire extinguishing system was not to be activated. When flames were no longer visible and normal operating temperatures were measured; controlled ventilation of the engine room was started. After starting the fans and measuring of the oxygen level, the engine room was given free entrance again.

Nobody was injured during this incident and the damage was limited to some carbon deposits inside the engine room and fire damage at the exhaust of PS main engine.

1.The communication between yard, service engineers, crew and docking team should be improved:

2. The condition of the insulation should be checked (if possible) prior to re-installing:

3. Care has to be taken of proper storage & protection of disassembled equipment (e.g. insulation) and store it away from the working area.

The results of the RCA were discussed and distributed among all vessel managers, which are engaged in major repairs. The RCA was also distributed to higher management and to QHSE & Marine Operations department. A summary of the RCA will form part of the info shared in the 6 monthly Technical Department Maintenance newsflash.