Transport Malta MSIU issued an investigation report on a fatal fall onboard the pleasure yacht 'La Polonia', while moored at Porto Maurizio, Italy. On the morning of 4 July 2018, the chief stewardess was found lying on the floor of her cabin, unresponsive, with her legs on the stairs. The autopsy and toxicological reports indicated an elevated percentage of ethanol in her blood.

La Polonia was moored with her stern to the pier at berth no. 9, Porto Maurizio, in the province of Imperia, Italy.

On the night of 3 July 2018, at around 2230, the chief officer and the chief stewardess went onto the pier drinking a glass of wine and smoking a cigarette, while they sat on a bench.

At around 2330, two crew members of another yacht, moored to the starboard side of La Polonia, approached the chief officer and the chief stewardess and invited them on board their yacht.

They accepted the invitation. The chief stewardess went back aboard La Polonia for a short while and, at 0005, she was seen disembarking from La Polonia. Her gait, at this time, was unstable.

At 0028, on 4 July 2018, the chief stewardess was seen walking up to the gangway of La Polonia, assisted by one of the crew member of the other yacht. Her walk was unsteady.

The chief officer of La Polonia returned on board at 0108 and noticed that the door of the chief stewardess’ cabin was shut.

At 0700, the chief engineer, who was occupying the aft berth in the cabin on the port side, woke up to a ‘wake-up’ alarm.

He noticed that the alarm was coming from the chief stewardess’ cabin, which was directly opposite his cabin.

As the alarm persisted, he tried to enter her cabin to check but felt that the door was obstructed.

When he finally managed to gain access, he found the chief stewardess lying face down on the cabin floor. Her head was turned to one side, her legs were on the stairs.

Fearing the worst, he immediately called the captain. The captain checked the chief stewardess for vital signs and, on not detecting positive signs, he requested the deckhand to contact the local emergency services.

The autopsy revealed a fractured second cervical vertebra (neck). This would have most likely been caused due to a fall from a medium height. The toxicological report revealed a blood alcohol content of 4.3 gl -1 (0.43 %) of ethyl alcohol, but neither medicines nor illicit drugs were detected,

As a result from the investigation, Transport Malta recommended La Polonia Malta Co. Ltd. to:

It also advised the Flag State Administration (Merchant Shipping Directorate) to revise Information Notice 29, to include the potential hazards of excessive alcohol consumption on board, as well as ashore. 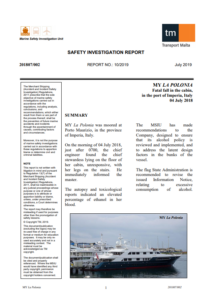