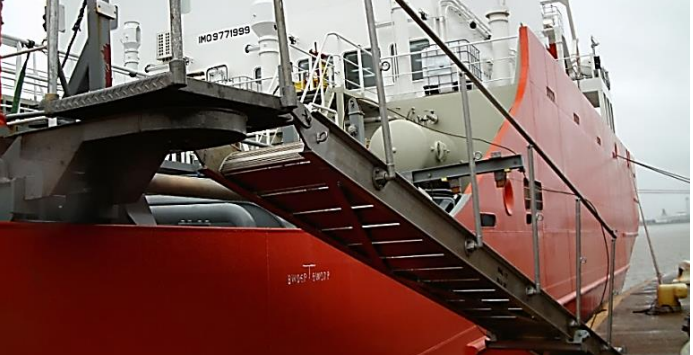 The Government of Luxembourg's Administration of Technical Investigations (AET) issued an investigation report on the fatal occupational accident onboard the chemical oil tanker Nabucco on 26 June 2017. The Chief Officer was working alone on the platform of the accommodation ladder, when he fell from the accommodation ladder platform between the vessel and the quay into the water.

On 26 June 2017, at 19:20, the Nabucco was all fastened and berthed port side alongside Associated British Ports (ABP) Terminal number 1 jetty in Saltend, Hull, UK. Two means of access were established. One gangway was installed to enable access in low water situation and the port side accommodation ladder was established for high water situations.

At around 22:50 the means of access were required to be changed as the tide was on the ebb and the accommodation ladder needed to be stowed away. The gangway was prepared for accessing the vessel.

-The loading had to be performed with the ship’s cranes instead of the cranes on the jetty that were inoperative;
-The ship’s gangway had to be moved by crane from the aft of the manifold to the forward end of the main deck to be installed, as jetty number 1 was partially blocked by ongoing works.
-The accommodation ladder had to be rigged from the aft end of the main deck as the gangway was deemed too steep for safe access to the ship during high-water.

AET recommends that the vessel operator evaluates its current level of SMS implementation together with all involved parties and, in respect of the results of the evaluation, takes corrective actions, where deemed necessary, to improve both the effectiveness of its SMS system and the level of safety culture onboard its vessels. 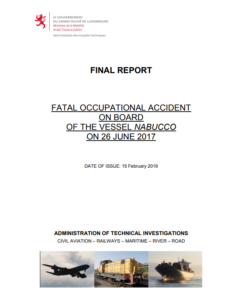