The UK MAIB issued an investigation report on the failure of a throw bag rescue line during a capsize drill on a rowing boat in Widnes, UK, in March 2018. The incident reiterated that, as throw bags are not considered safety or lifesaving equipment, there is no requirement to manufacture them to a specific safety or quality standard.

On the evening of 24 March 2018, the Warrington Rowing Club was carrying out a boat capsize drill in a swimming pool. At around 1830, as a young person was being pulled to the side of the pool using a throw bag rescue line, the line parted. The young person was uninjured during the incident. The parted line was examined and found to be made up of four pieces of rope thermally fused together, and it had failed at one of the joints.

A customer notification campaign by the manufacturer, RIBER, and prompt publication of the incident in British Rowing’s newsletter, identified a total of ten throw bags with defective rescue lines. Laboratory tests conducted for the MAIB established that the joined sections were 12 times weaker than the rope itself.

UK MAIB recommended to the British Standards Institution to develop an appropriate standard for public rescue equipment ensuring that the topic of throw bags and their rescue lines is addressed as a priority. 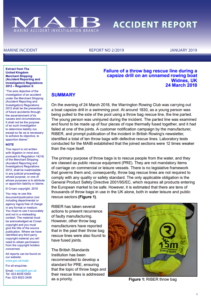