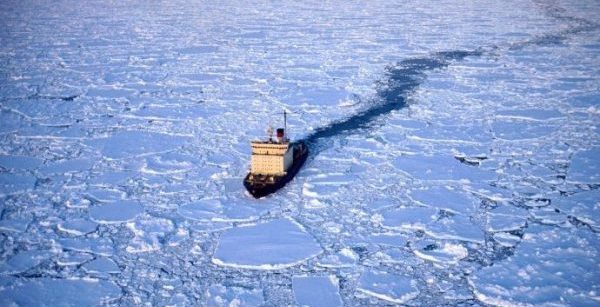 On March 16th, Dr Sian Prior, lead advisor to the Clean Arctic Alliance, responded to European Parliament 483/100 plenary vote to pass its Resolution on the Arctic, and made a call “on the Commission and the Member States to actively facilitate the ban on the use of heavy fuel oil (HFO) and carriage as ship fuel in vessels navigating the Arctic seas through MARPOL of IMO”.

In particular, he noted: “Today, the elected representatives of European citizens have delivered a clear message to the International Maritime Organization – it’s time to ban the use of heavy fuel oil from Arctic shipping.  By putting a ban in place by 2020, the IMO has an opportunity to reduce both the impact of oil spills and the levels of pollutants which drive the melting of Arctic snow and ice”.

Faig Abbasov, shipping policy officer at Transport & Environment, said: “We welcome the European Parliament’s clear call for a ban on the use of the refinery residues by ships in the Arctic. The next meeting of the IMO’s environment committee is an important occasion to start formal discussions on addressing the risks related to using heavy fuel oil in the Arctic. Today’s vote should be a clear signal for EU member states to put heavy fuel oil on the IMO’s agenda in its next meeting.”

The International Maritime Organization’s Marine Environment Protection Committee (MEPC) will meet this July 3-7 in London, where it is expected there will be a submitted on the risks of using heavy fuel oil in Arctic shipping.  The Clean Arctic Alliance is calling on IMO Member States to support efforts to address such risks, including measures leading to a ban.

The Arctic resolution represents the European Parliament’s position regarding the Joint Arctic communication published by the EC and EEAS in April 2016. The resolution is a non-legislative document, which together with similar conclusions by the EU Council will guide future EU policy addressing environmental risks in the Arctic.

Despite its positive language towards environmental protection, the joint Communication by the EC/EEAS fell short of calling for a ban on HFO use by ships in the Arctic, prompting disappointment in April last year from the environmental organisations that would later form the Clean Arctic Alliance.

In contrast, the resolution adopted today by the European Parliament “calls on the Commission and the Member States to take all necessary measures to actively facilitate the ban on the use of heavy fuel oil (HFO) and carriage as ship fuel in vessels navigating the Arctic seas through the MARPOL Convention, and/or through port state control as regulated in the waters surrounding Antarctica; invites the Commission to include the environmental and climate risks of the use of HFO in its study on the risks that the increase in navigation of the Northern Sea Route would bring; calls on the Commission, in the absence of adequate international measures, to put forward proposals on rules for vessels calling at EU ports subsequent to, or prior to, journeys through Arctic waters, with a view to prohibiting the use and carriage of HFO”. (Video of the European Parliament vote may be found here ).

On January 25th 2017, expedition cruise ship operator Hurtigruten and the Clean Arctic Alliance signed the Arctic Commitment, which challenges businesses and organisations to step forward and call on the International Maritime Organization to implement a phase-out of polluting heavy fuel oil from Arctic shipping by 2020. A number of other organisations, including Finnish icebreaker company Arctia and the Association of Arctic Expedition Cruise Operators, have also now signed the Arctic Commitment.