A European Commission-funded impact assessment into a potential Mediterranean emissions control area (ECA) concluded that designating such an ECA would result in significant socio-economic benefits. The assessment is the third study to be published since the middle of December.

The outcome of the European Commission-funded impact assessment was produced by the International Institute for Applied Systems Analysis (IIASA), aligned with the latest findings of the French ECAMED report published in mid-January 2019.

IIASA’s and the Commission’s study explored the impacts of alternative emission control interventions for international shipping on the European Seas on relevant air pollutant emissions, examined their consequence on ambient air quality in Europe and the neighbouring regions, and explored the resulting improvements of human health.

The study showed that further controls of SO₂ emissions, through SO₂ emission control areas, could deliver rather fast benefits, and avoid by 2030 up to 4000 cases of premature deaths annually, and 8000 in 2050. In the longer run, by 2050, application of Tier III NOx standards could double the health benefits.

As shown in the graph below, the emission controls examined in this report could avoid up to 15,000 cases of premature deaths annually, about one third of them in the EU-Member States, and 50% in North Africa and the Middle East.

Designation of the Mediterranean Sea as an Emission Control Area could by 2030 cut emissions of SO2 and NOx from international shipping by 80 and 20%, respectively, compared to current legislation. These additional emission reductions could avoid 4,100 cases of premature deaths in 2030 and more than 10,000 annual premature deaths in 2050. Even with the most conservative assumptions for health valuation, monetized benefits are on average 4.4 times higher than the costs in 2030 and 7.5 times higher in 2050.

Enhanced emission controls could cut emissions from international shipping in the European Seas by more than 90%.

In the meantime, IMO Regional Marine Pollution Emergency Response Centre for the Mediterranean Sea (REMPEC) published a draft technical and feasibility study to examine the possibility of designating the Mediterranean Sea, as an ECA under IMO’s prevention of pollution convention (MARPOL) Annex VI at a regional workshop on 11-13 December 2018.

the study resulted to the fact that a Mediterranean ECA standards will establish about a 95% reduction in SOx emissions from vessels, in comparison to the current operations or a 20% point rise on the reduction under MARPOL VI rules. Particulate matter (PM) emissions will decline by 62% if a Mediterranean ECA were designated, an 11pp increase compared with MARPOL VI.

IMO’s draft recommendations will be discussed at the 74th session of the Marine Environment Protection Committee (MEPC) on 13-17 May 2019.

Concluding, REMPEC is a firm supporter of a cleaner air environment. In a past study REMPEC conducted, resulted to the fact that many are the benefits of implementing a SECA in the Mediterranean region. Therefore, additional costs will be needed, but health and environmental benefits would be significant.

For more information on the IIASA report, click herebelow 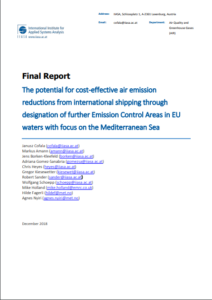