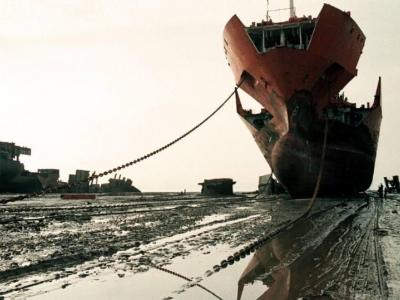 Plans to clean up the scrapping of old ships and ensure the materials are recycled in EU-approved facilities worldwide were backed by Parliament on 18th of April. The plenary did not endorse an Environment Committee proposal for a recycling fund financed by a levy, but it did call on the European Commission to propose plans for an incentive-based system before the end of 2015.

The draft regulation aims to reduce the adverse effects of careless scrapping, such as accidents, injuries or damage to human health or the environment, by steering EU-ships towards EU-approved facilities worldwide.

The Environment Committee report, drafted by Carl Schlyter (Greens/EFA, SE) proposed that the scheme be funded by a recycling levy to be imposed on any ship using an EU port, in line with the "polluter pays" principle, so as to steer these ships at the end of their lives into proper recycling facilities.

The plenary opposed the recycling fund levy proposal by a narrow 299 votes to 292, with 21 abstentions. Instead, members adopted an amendment calling on the European Commission to table a legislative proposal before the end of 2015 "for an incentive-based system that would facilitate safe and sound ship recycling".

"While the EP has voted to put an end to European ships being recklessly scrapped in developing countries in hazardous conditions, this is jeopardized by the failure to adopt a financial mechanism to support it. It is very frustrating that a narrow majority succumbed to highly misleading lobbying by the maritime sector, seeking to shirk its responsibilities, and voted down the proposed financial mechanism that would have made safe ship recycling competitive", said Mr Schlyter after the vote.

Mr Schlyter's report was referred back to the Environment Committee even though the amended proposal had been approved by 499 votes to 50 with 55 abstentions.

Penalties would be imposed on owners of EU ships that are sold and sent, within twelve months of the sale, for recycling on a beach or in a facility not on the EU list.

Parliament's approval of the amended proposal gives Mr Schlyter a mandate to negotiate a first-reading agreement with EU ministers. Discussions are to start in May.

You may refer to the relevant article