Following the recent crisis that the World Trade Organisation’s Appellate Body experienced, the European Parliament called ECSA to join the efforts in resolving this crisis, in favour of the shipping trade.

The European Parliament, which recently published a resolution about the crisis of the WTO Appellate Body, called ECSA to make its efforts to avoid the Appellate's Body ending, from 10 December 2019.

With the United States blocking the entry of any Appellate Body member and rejecting several proposals to launch the selection process to fill the remaining vacancies since 2017, Appellate's body members will expire if ECSA won't act immediately.

Should the WTO’s Appellate Body cease operations after 10 December 2019, Europe and the rest of the world will suffer serious economic and financial consequences.

In case of cease, the Appellate Body will no longer be able to hear any new appeals, while it will have negative results and unpleasant consequences for the rules-based multilateral trading system.

In light of the situation, earlier this year the European shipping industry expressed its worries of the breakdown in the multilateral trading system presenting how the sustainable economic growth can be affected when the trade barriers turn to be more prevalent.

We support the EU’s call to resolve the current crisis faced by the WTO and its various functions in the best interests of all nations.

During May 2019, ECSA in collaboration with the ICS and ASA created a joint paper, highlighting the global's shipping observations.

You may see the joint paper herebelow: 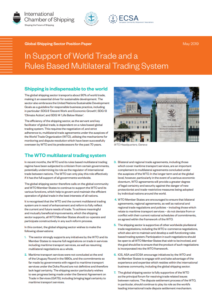