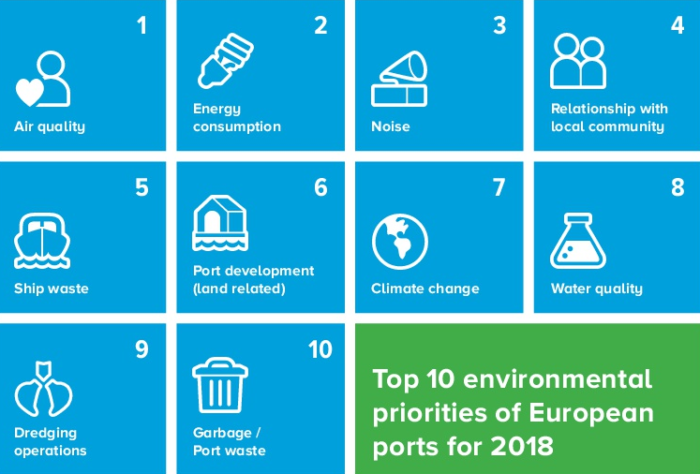 Air quality is the top priority of the European ports since 2013, while the increased interest in the relationship with local community in position 4.

In addition, climate change is becoming of high importance for European ports, as it made it in the Top 10 for the first time in 2017 and climbed to the position 7 in 2018. In fact, almost eight out of ten European ports consider climate change when they create new infrastructure projects.

Moreover, 59% of ports improved the climate resilience of existing infrastructure and 41% of them have already addressed operational challenges due to climate change.

Marine litter-related priorities are also high in the Top 10 list. Waste was the most monitored issue increased by 17% since 2013. This shows the readiness of ports to deal with the issue of marine litter.

What is more, 73% of the ports are certified under an environmental standard (ISO, EMAS, PERS), an increase of 19% since 2013, while 68% of them make their environmental report publicly available.

Regarding alternative fuels infrastructure, the report finds that 24% of the ports provides high voltage shore-side electricity for ships at berth and 30% of them with LNG refueling points, while 24% is currently developing LNG infrastructure projects.

In addition, ESPO reported an increase of investments on alternative fuels infrastructure, but it mentions that related port investments would be faster if the remaining barriers for uptake are addressed. One of these barriers is energy taxation on electricity, which is considered as a significant barrier for the uptake of shore-side electricity for ships.