In light of IMO’s MEPC 74 meeting in London being conducted this week, groups issue call to reevaluate scrubbers as alternative compliance tool for 2020 fuel standards, citing evidence in US federal case against Carnival Corporation.

Specifically, ten international non-governmental organisations have sent a letter to IMO Secretary-General Kitack Lim to call for an immediate moratorium on the shipping industry’s use of scrubber technology, or Exhaust Gas Cleaning Systems (EGCS), as an alternative compliance mechanism for current Emissions Control Areas and the looming 2020 fuel sulphur standards.

This letter follows the publication of evidence, revealing that Carnival Corporation are an obvious example that EGCS systems have failed many times, resulting to air and water pollution.

As the letter quotes

Scrubbers have been referred to as “emissions cheat” systems and for good reason. These systems effectively turn an air pollution problem into a water pollution and toxic waste problem.

The ones signing the letter call for IMO to not only implement the use of scrubber technology, but to also consider removing EGCS as an alternative compliance mechanism set forth in the International Convention for the Prevention of Pollution from Ships (MARPOL) altogether. Removing the loophole would effectively require the cruise and shipping industry to switch to cleaner, low-sulphur fuel in compliance with new global fuel standards in 2020.

As Carnival Corporation’s criminal debacle has shown, EGCS are not the answer to delivering air pollution reductions for the shipping sector. We are calling on the IMO to take the lead on avoiding the inevitable failures and resulting environmental and health impacts of scrubbers by putting in place a moratorium while the IMO reviews the technology’s marine and air pollution impacts. Fortunately, a moratorium would be relatively easy to implement because a truly reliable compliance mechanism already exists: burning cleaner, low-sulphur fuel.

Moreover, the letter was signed by Stand.earth, Pacific Environment, Transport & Environment, Seas at Risk, Ecodes, Circumpolar Conservation Union, NABU, Friends of the Earth US, Environmental Investigation Agency, and WWF Canada; the ones participating in the letter aspire to highlight how Carnival Corporation is embroiled in serious illegal activities, following hundreds of environmental violations committed during its first year of probation, for seven felonies it pleaded guilty to in 2016.

The letter marks that the above violations weren’t only conducted in US waters, but also in ECAs, the EU, Iceland and the Bahamas.

Maritime Emissions Control Areas attempt to protect human health and the environment from some of the most harmful pollutants in ship exhaust. In 2020, we will see a global tightening of the rules for ship fuel. Unfortunately, a glaring loop-hole in the international regulations lets ships avoid switching to cleaner fuels by using scrubbers, also known as ‘emissions cheat systems’. Recently a number of countries have identified red flags arising from their use. Therefore, they should be restricted in line with the precautionary principle. 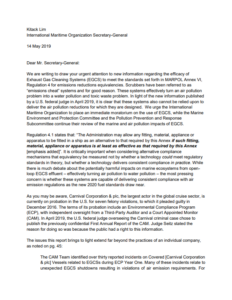