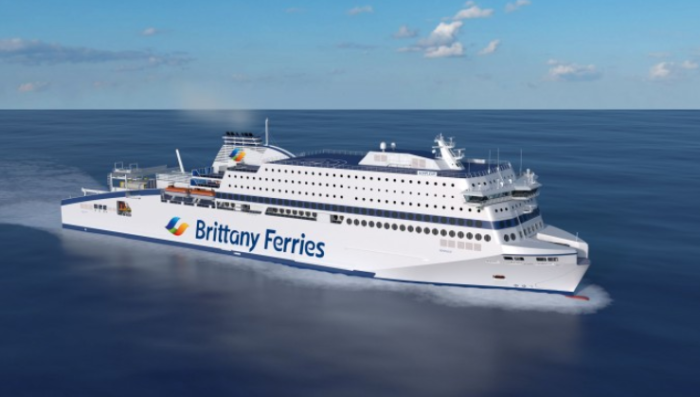 The continuous increase in the number of LNG-fueled ships are assisting the rise of several bunkering infrastructure along Europe. However, the English Channel will not see its first gas-fueled ship soon, as Brittany Ferries' 'Honfleur', which was to be delivered in June, will now arrive later in 2019, as the yard experiences financial fines.

Once completed, Honfleur will carry up to 1,680 passengers and will come with 261 cabins, two cinemas, restaurants, boutique shopping and expansive passenger lounges. Wi-Fi will also be a feature in all areas of the ship, including cabins and access from the car decks to passenger areas will be made as easy as possible for all passengers.

As Brttany Ferries said, Honfleur will be the first passenger ship in the world to be equipped with on board cranes that allow 40 feet (ISO standard) LNG containers to be lifted into a fixed position.

Containers will be transported by truck from an LNG terminal to Ouistreham and then driven on board. They will then be accommodated into position alongside a fixed LNG storage tank located at the rear of the superstructure. Upon the next call at port, empty containers will be removed and replenished with full units.

Although Honfleur is not the first ship to be powered by LNG, she will be the first regularly operating on the Channel. Ferry services powered by LNG already operate in the Baltic Sea and the technology is tried, tested and safe. This is colourless and odourless, and many thousands of cars and commercial vehicles are currently fuelled by LNG

The deal for building Honfleur was the first project to receive finance under the €750M Green Shipping Guarantee programme launched in 2016 by the European Investment Bank, aiming to promote low-carbon investments.

Moreover, some elements of Honfleur's design and engineering have also received funding through the Investissements d’Avenir scheme, overseen by the French Agency for Environment & Energy Management.

In addition, new ships as well as technologies are coming for Brittany Ferries’ long-haul routes. In fact, from 2021 and adding one vessel a year until 2023, the company will charter three newbuilds built for Stena RoRo at AVIC Weihai shipyard in China, of which at least two will be powered by LNG.

What is more, the company has signed a bunkering agreement for one of the ships, as Repsol will provide a long-term supply of LNG and shoreside infrastructure to Salamanca, which will start operations in 2022.