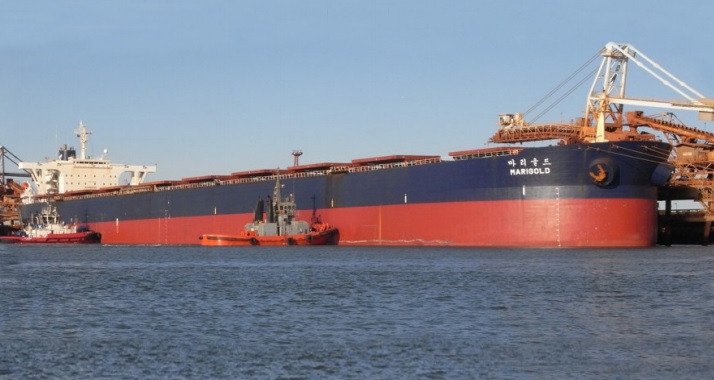 Engine room fire on board the bulk carrier Marigold

ATSB has issued report regarding a fire which started in the engine room of the bulk carrier Marigold, while it was loading a cargo of iron ore in Port Hedland, Western Australia. Firefighting by the ship’s crew included activating the Halon gas fixed fire suppression system for the engine room. However, a full release of Halon gas did not occur, nor was the engine room effectively sealed. Consequently, the fire continued for about 12 hours until it burnt itself out.

The ATSB determined that the fire began on Marigold’s number one generator after a fuel oil pipe fitting on it failed. The resulting spray of fuel oil likely contacted a hot surface on the generator and ignited. The deployment of the ship’s Halon gas fixed fire suppression system was ineffective, as a full release of Halon gas did not occur and the engine room was not effectively sealed.

Failures within the Halon system and multiple failures of the ventilation closing mechanisms were indicative of a lack of effective planned maintenance on board. The port’s emergency response plan was initiated, but there were misunderstandings between the agencies involved as to the roles of the others during the initial stages of the incident and response. Their emergency plans did not refer to trigger points for transfer of control or include detailed instructions of how to hand over control during an incident.

ATSB advises that response to a large fire on board a ship in port will involve the ship’s crew and shore fire crews. The initial response and fire containment by the ship’s crew requires a thorough knowledge and understanding of firefighting procedures and systems, knowledge which needs to be effectively maintained. Where multiple shore response agencies are involved, their emergency procedures need to be consistent with each other, such that individual and team roles and responsibilities are well understood and ensure that agencies can coordinate an effective response.

Further details may be found by reading the ATSB report below: