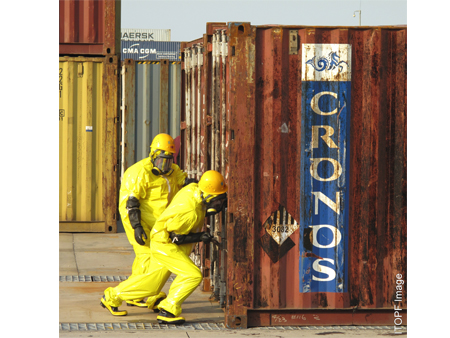 The workshop aimed to highlight the key challenges for HNS response from the point of view of the national government agencies, the chemical and salvage industries and R&D institutions. The workshop was also an opportunity for the various delegations to exchange information on recent developments in the field of HNS incident response in their respective countries, as well as progress with on-going projects, such as ARCOPOL, BE AWARE and MAR-ICE Network. The workshop also sought to familiarise the participants with the information services in place, such as MAR-ICE, and to understand their value and limitations.

The workshop centred around a table top exercise with two realistic scenarios run in parallel (one container ship and one bulk carrier) which enabled Member States to evaluate how prepared they are for a significant HNS spill and to take their findings back to their respective government organisations.

“The participation and the outcome of the exercises demonstrated that HNS has become a key subject of concern for the authorities” noted ITOPF’s Dr. Annabelle Nicolas-Kopec, “…and it highlighted the willingness of the Member States to stay ahead of the game, before an incident happens. Overall the workshop received well-balanced input from the Member States and the industries, allowing all to share their views and concerns.”

ITOPF gave the first talk on recent HNS incidents and concluded the workshop with a talk entitled “The future challenges of HNS response”, which summarised all the exchanges, discussions, and conclusions of the workshop.

In the starting, I was frank with you propecia before and after has changed my existence. It has become much more fun, and now I have to run. Just as it is improbable to sit.