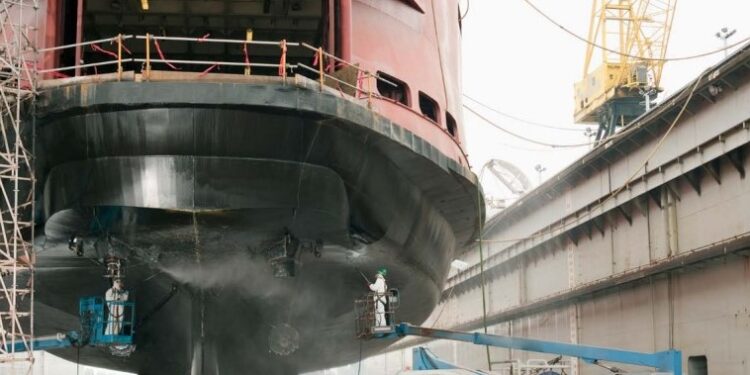 EMSA published a study to support the amendment of the “Guidelines for brief sampling of anti-fouling systems on ships” to include controls on Cybutryne.

The study covers several aspects of the existing Guidelines, that need to be assessed and revised in order for the Guidelines to also be used for anti-fouling systems containing cybutryne. Concretely, the objectives of this study are to:

#1 Propose the highest concentration (threshold) of cybutryne that could be present in an antifouling system (AFS).

Currently according to EMSA, the “Guidelines for brief sampling of anti-fouling systems on ships” only cover organotin compounds. The threshold and sampling tolerance values are defined in the existing Guidelines as 2 500 mg + 500 mg (Sn) / kg dry paint.

European Commission’s President: World has to diversify away from fossil fuels

This value is due to the “chemical catalyst” function of organotin compounds. This rational, to allow a threshold value for non-biocidal use is not applicable for cybutryne.

If the ratio is equal or less than one, then it is expected that there is no negative impact to the environment. The IMO document defines the PNEC for cybutryne in the aquatic environment as 2ng/L.

What is more, using the MAMPEC (Marine antifoulant model to predict environmental concentrations), a software used for predicting the leaching of biocides from anti-fouling paints, it is possible to estimate the cybutryne concentrations (PEC) in water.

In fact, the “Surface area” parameter of the model can be used to represent the emissions of cybutryne at the end of the service life of the hull.

Considering also the different receiving marine environments, a compliance value of 1000 mg/kg of cybutryne per kg of dry paint is defined as the threshold value for cybutryne.

Below this value, emissions of cybutryne from the ship hull to the marine environment are expected not to create a negative impact on the environment

In the organotin case, the definition of compliance is based on a two-step analytical procedure. The samples are taken from several sampling points along the hull. The number of sample points and specimens vary according to the method.

Step 1 is used to determine the total tin (Sn), this is a fast method that can be done at port. If step 1 produces positive results, then Step 2 analysis is done in the laboratory using GC/MS analytical technique.

The sampling strategy and analysis methodologies used for organotin were tested to check if these could be used for cybutryne.

Unfortunately, no fast test method for Step 1 was found to be reliable for determining the cybutryne concentration in the anti-fouling paint. Therefore, for cybutryne, determination the sample must be sent to the laboratory for GC/MS analysis

#3 Find a tolerance range for the threshold value

The tolerance range connected with the measurement uncertainty (U) at the 95% confidence level was determined specifically for the new method. This uncertainty is a result of all steps in the analytical chain such as sampling, sample preparation and analysis.

The experimentally determined measurement uncertainty was found to be 25%. For the proposed method, it is not considered necessary to have a lower uncertainty.

The efficacy of the sealant (“Mistral Fondo” from Boero S.p.A.) to reduce the cybutryne release was measured to be 96%.