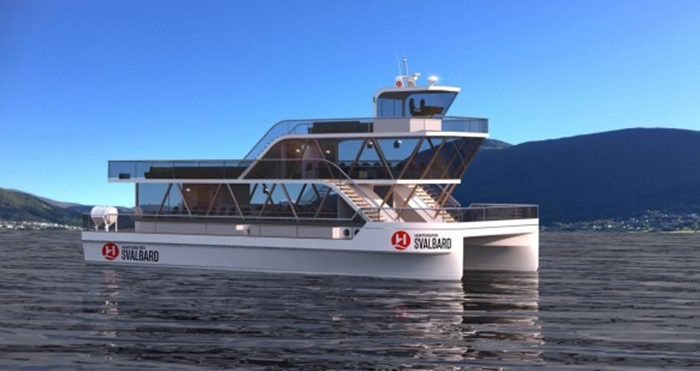 Hurtigruten launched silent, electric-powered and emission-free catamarans. The company has collaborated with Norwegian startup Brim Explorer, in order to introduced the battery powered catamarans, which are custom built for Polar water exploration.

Starting operations in the spring of 2020, the 24-meter vessel will operate in daily ocean excursions from Longyearbyen on the Arctic island of Svalbard.

The hybrid catamaran will be able to be charged at virtually any port and operate on batteries for 10 hours with a cruising speed of 10 knots.

What is more, Hurtigruten and Hurtigruten Svalbard will also work closely with Brim Explorer to continuously improve and develop the green technology, such as integrating solar panels with the electric driveline to exploit the 24-hour Arctic sun to charge the batteries while sailing. Developing renewable energy stations in smaller ports for charging is another project under development.

In addition, in order to capture wildlife, the explorer catamarans will also feature hydrophones and underwater drones from another Norwegian startup already partnering with Hurtigruten – Blueye Robotics. Their drones will be introduced to several of Hurtigruten’s expedition cruise ships, as well as all Brim Explorer experiences.